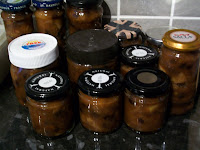 Having had a large bag of apples from a colleague in exchange for a bag of our pears, I decided to make mincemeat again - it's always good to get ahead for Christmas, even though I still have a jar left from last year! I used Nigella's no suet recipe, and as I could only buy a 500ml bottle of cider (and the recipe calls for 250ml), I decided to make a double quantity. It only just fitted into my Mum's pressure cooker (I don't use the pressure bit - I wouldn't know how - but it is the most cauldron like receptacle that I have). I've somehow ended up with 13 jars of the stuff! As I ran out of jam jars, I had to use an old Nutella jar and an old coffee jar which obviously don't seal properly - I'm keeping them in the fridge for now. But this is where my readers come in - please share with me your favourite things to do with mincemeat apart from mince pies as I'm going to have to try to use it up in the next couple of weeks. I'm thinking about an apple and mincemeat sponge pudding or maybe crumble, but does anyone have any other ideas?
Posted by verity at 09:58