Not one but three bakes

I've definitely been in need of sugar to get me through the last few days and so todays Tuesday post, traditionally a baking one, has three bakes to share.

Nanaimo bars
When I asked Mr W what he wanted me to bake next he said "those stripey chocolate things". We had seen a recipe for Nanaimo bars in the Boy that bakes cookbook which he liked the look of. In fact, I had a slightly plainer (no double cream!) recipe from a Woman's Weekly magazine which I had been meaning to bake for a while, so I was happy to oblige. The Nanaimo bar originated in the town of Nanaimo in Canada. It has a cocoa and coconut flavoured biscuit base, a layer of custard flavoured buttercream and then a layer of chocolate icing. By coincidence, it was a Canadian colleague's birthday at the weekend and she brought some of these in for us to try - she used a slightly different recipe from here. It was similar to mine, except that the custard buttercream and chocolate layers were thicker. Frustratingly this all got eaten before the camera came out.

Chocolate orange cookies
I had a craving for something chocolately and orangey so consulted my recipe books. I chose a recipe for cookies from my Baking magic book which I haven't had out for a while. The cookie is flavoured with cocoa and orange zest, the chocolate chunks are Terry's chocolate orange. I made them with gluten free flour. 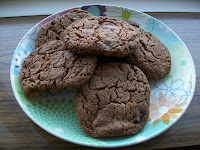 Lemon curd cakes
My friend Geraldine mentioned making lemon curd cakes the other day and I asked for the recipe as I had half a jar of lemon curd lurking in the fridge that wasn't nice enough for spreading but was perfectly good for baking. Geraldine's husband has coeliac disease so she is used to doing gluten free baking and so I was able to enjoy these too. Yummy! 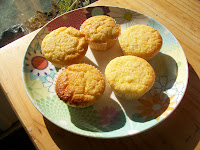 I took the second two bakes into work this Sunday and they were much appreciated.
Posted by verity at 18:40