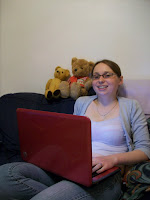 Look at Cardigan Girl's new toy! I've had it since the start of the week but today is the first day I've been able to wrestle it from Mr W...I thought the pink would act as a deterrent but evidently not. It was only the arrival of his new bike that meant I got my hands on it.
I hope it'll make my blogging easier - it's better all round as it has an English keyboard (our PC has a Russian one), and I can use it when Mr W is using his. But mainly we got it so I can stay connected when I go to Tenerife in Feb - given the HUUGE bill I had for using my phone in Austria when I had Mr W's company, a laptop seems like a bargain as long as I can find somewhere with some wifi. It's got a webcam too so I might even be able to show off my suntan to Mr W.
Posted by verity at 20:05