I have recently become involved with an organisation called Free cakes for kids; an idea which came over from the states, there are now a number of groups in the UK, including in Oxford. As it says on the website:

"Free cakes for kids is a community service to families who find it difficult to provide a birthday cake for their child. The cakes are baked by volunteers from your community – with your kid’s favourite theme or style. The service is free, friendly and confidential"

They also organise community baking sessions, which I am hoping to be involved with.

But I got asked to make my first cake for this weekend (bakers donate time and the ingredients); I was told that the birthday child was a four year old girl and had visions of making something pink and sparkly. When I rang up her Mum to ask what she would like, I was told that her favourite thing were the Zingzillas. Not having heard of them (though I have subsequently found that they are quite cute, although possibly difficult to make out of cake), I asked what else she liked, and her Mum said Spongebob. "Well", I thought to myself "at least Spongebob is square (for those of you who don't know - and I didn't - until K enlightened me, Spongebob is a sponge who lives at the bottom of the sea and goes on adventures with his friend the starfish). I spent most of the week agonising about how to do it, looking for pictures on the internet, and then in my cake decorating magazine I saw a picture of a Spongebob that someone else had made. And here is my version! 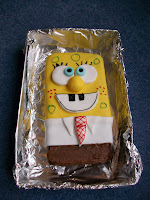 I am seriously proud of this as have never made anything like it before! I gave it to the little girl's Dad and he was impressed that anyone would make a cake, and I really hope that the little girl likes it.

I still managed to bake from the cupboards - I used drinking chocolate from our Christmas hamper to make the chocolate cake and the buttercream, I used writing icing and blue food colouring from my cupboards, and the only thing I bought was a packet of yellow sugarpaste for £1.95.
Posted by verity at 12:26