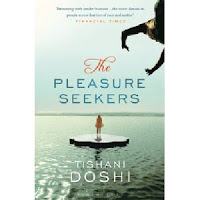 From Nigeria, to Canada, and now to India and Wales, this year's Orange Prize longlist has certainly had me globe-trotting. And a third book which I found extremely enjoyable: The pleasure-seekers, by Tishana Doshi. Like the other two, it is also a debut novel (there are 7 first novels in total on the Orange longlist)

It is the late 1960s. Babo Patel has left his family and betrothed in Madras to seek his fortune in London. After an initial culture-shock, getting over the fact that he no longer has to live closely in his family's pockets, and starting to drink, and eat meat, both forbidden by his Jain background, he settles down, and almost immediately falls in love, with Sian, a beautiful Welsh girl who has gone to London in search of excitement. The minimal family that Babo has in London gain wind of this and inform his parents back at home, who summon him back under false pretences. Whilst this could have been the end of the story before it has even begun, Babo is adament that he will marry Sian, and his parents, sensing his seriousness bargain with him - they can marry, but only after a separation of six months, and only if Sian comes to India to live for the first two years of their marriage.

The story at first centres around Babo and Sian as they settle down into their marriage, making a visit to Wales for Christmas, and having their children. But the years pass, and their children grow up and they then become the focus of the book. Mayuri and Bean, the two daughters find their ways in the world. It was very much a book of two halves - I was absolutely riveted by the tale of Babo and Sian, but that of Mayuri and Bean and their respective love lifes (and lack of) just didn't seem to awake my attention so much. I still enjoyed the book overall, it was just that the first part was so very very good, that the rest of it didn't quite compare.

Like the last two books I've read from the Orange longlist, I found this immensely readable. The characters and settings were vibrant and colourful and I was intrigued to see where the story was going. The Indian characters in particular stood out. I loved the way that it dealt with the merging of two very different cultures. Again, it might not appeal to somebody who likes a lot of plot in their books, but being less that way inclined, and more interested in books about people I really enjoyed it. And again, I had not heard of it previously, and am not sure that I would have picked it up without its Orange endorsement.

Many thanks to Alice at Bloomsbury for sending it to me.
Posted by verity at 17:15