Baking from the cupboards 10

Yes, there is a tenth baking from the cupboards, and we're still going strong. This week I finally used up the tin of pumpkin puree, that I couldn't even remember buying, let alone what I had in mind. Somehow I didn't fancy making a pumpkin pie, but I dug around on the internet and found this recipe. It smells AMAZING, partly due to the fact that I was a bit heavy handed with the nutmeg. I used cranberries in it, and walnuts, and just a straightforward butter icing rather than the cream cheese icing suggested. The butter icing isn't the day glo colour in the picture I hasten to add, I think that was just a result of the amazing early morning sunshine when I took the snap. 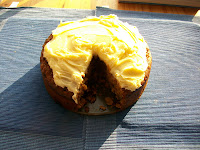 This week's biscuits were Easter biscuits from a cookie baking book that a friend gave me quite a few years ago now, when I was doing my masters and eating A LOT of biscuits along the way. It's not Easter yet, but it is Lent. There was a slight deviation from the recipe as I didn't have any mixed peel, so I just left that out, and it enabled me to finish off a small number of currents which were languishing in the cupboard. 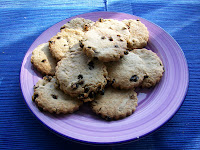 And finally, I met up with a blogger friend who celebrates a significant birthday this week at the weekend (more about that soon), and baked her some birthday shortbread. I took this picture in case they got broken en route. (and yes, I did sprinkle some edible glitter on them!). Happy Birthday Claire! 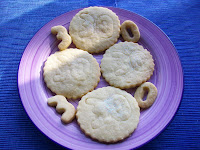 ***
Various of you have commented saying that you wish I would use up the things from your comments, and I've had a couple of requests for suggestions of things to make in the last week:

Zehra at a Life in writing asked me what to do with a load of kiwi fruits that needed using up; my first rather boring suggestion was fruit salad, but I thought a bit harder and came up with this recipe for a ginger cheesecake with kiwi fruit - I so want to give this one a go myself.

Geraldine in the comments on my last post wondered if there was anything that she could do with some banana flavoured Nesquik sitting in her cupboard. I thought a chocolate cake with banana custard flavoured icing would be nice, extending the principle of my custard cake, but I know her husband doesn't like chocolate. So I suggested a banana cake with banana Nesquik icing, or these biscuits which were on the Nesquik website.
Posted by verity at 17:04