Baking from the cupboards 8

Who can believe that I have been baking from the cupboards for 8 weeks, and I'm still not out of either ideas or things to bake with?! I haven't even had to buy any more sugar yet! Only two bakes this week, due to the absence of K, and the only thing that I really managed to use up was 1/3 packet of cranberries. You see, I'd bought bananas, but with only me around to eat them, they went black before they were all used up, so I had to make something banana-y. I'd wanted to try a banana and cranberry loaf from the M and S Easy Baking book for a while, and these little cakes were my version: 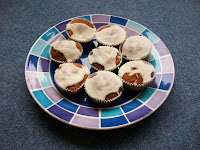 The original called for mixed peel, and nuts alongside the cranberries, but I just upped the amount of cranberries. They were also flavoured with orange zest, and given an extra zing with some icing made from orange juice. It also pleased me that they required vegetable oil rather than butter, which meant that I could finish off a bottle of vegetable oil that I hadn't used for ages (as I use olive in my cooking). K didn't manage to buy anything for his co-workers whilst away, and as I'd ended up with 24 of these, he took them in to share.

Not sure if he will share the melt in the your mouth shortbread Happy Hippopotami that I made for his lunchboxes this week - aren't they cute? 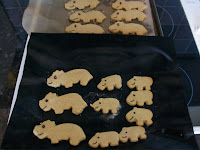