First of all Pannettone. I have long enjoyed this Italian yeasted cake, and decided that it was time that I had a go at it. It is traditionally served at Christmas and New Year, so I planned to make it for New Year. Even having flu did not prevent me from attempting this; lying in bed on the 31st I cried with frustration at not being able to do the things that I wanted to, so got up and got into the kitchen (after all, K already had my germs...). I used a recipe from BBC Good Food, but I modified their white chocolate and cranberry version to a more traditional fruit and mixed peel. I was sooooo glad to have my Kenwood mixer to knead the dough, but actually it was quite a flu friendly recipe as there was lots of waiting for the dough to rise when I could return to the sofa. It came out wonderfully; K, who, in my indisposition had had stollen for breakfast and danish pastries for lunch, immediately had a large piece (and then claimed that he was coming down with flu too because he felt sick). And then it has been a breakfast food for another week. It didn't come out as tall as they sometimes look, mainly because my tin was quite wide, but it certainly seemed to taste and smell authentic. 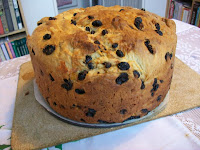 Secondly, snowman-embossed shortbread! Just this week before we were about to take the Christmas decorations down, I recieved a little package in the post from Geraldine (a wonderful email friend who I met through this blog). It was a jolly Snowman cutter! Fortunately its arrival coincided with my morning off so I was able to try it out straight away - it didn't work with the shortbread dough I whizzed up, because it was too soft and got stuck in the intricate design, but just as I was disconsolately pressing the dough into a round tin, I had a brainwave with an exciting way to use it! 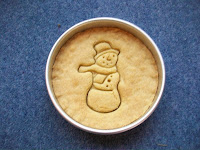