I wrote a whole series of posts during October/November/December detailing my plans for Christmas and I thought it would be fun to revisit them and see how they worked out!

Christmas chutney We have eaten one of the 6 jars of chutney and given one away - it has a lovely Christmassy flavour but is a tiny bit too vingerary for my tastes - perhaps it needs a little longer to mature. It certainly looks very Christmassy on the plate and was a welcome addition to our plates of cheese and biscuits over the festive period.

Mincemeat This recipe was absolutely fantastic - I made mountains of mince pies with it, as well as a large mincemeat shortcake (which I forgot to photograph), and my only complaint was that I didn't make more of it! It was nice to have a fat-free mincemeat as it felt a tiny bit healthier and had a lovely fresh taste. I still have one jar left which I will be using to cheer us up at some point in February.

Thank you cards I've used a lot of my Snowman decoupage cards to write my thank you letters which has nade the chore a little less painless.

The one thing that I didn't get the chance to blog about was my Christmas Granola, which I made using a recipe from Nigella's Christmas book. It combined oats with almonds and pecans and honey and sugar and cinnamon and then some yummy cranberries were stirred in after baking. It smelled AMAZING and tasted fantastic - the only thing was that I had made so many other nice things for breakfast (namely a large stollen and then a large pannetone) that not much of it actually got eaten over the festive period (perhaps cereal is a tad healthy?). At least here is plenty left to enjoy now (and I even used some in a cookie recipe this week). I am definitely a convert to making granola now and don't think I'll ever go back to buying it in a shop as it was ridiculously simple to mix up the ingredients in a large bowl and then bake them, and the bonus is that you can include your favourite things (just remembering not to put the fruit in until afterwards). 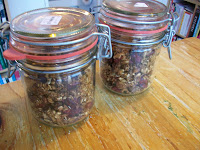 As to next year - I will definitely be making my own mincemeat again, in a double quantity so I can give some away. I want to make my own cards again, but I think I will go for some papercraft next year, which means I probably need to start thinking about them NOW as we will need around 75 I think!

We still have quite a lot of Christmas food left, so I hope that the Twelth Night rule doesn't apply to that...and we will be eating the gingerbread house in a gingerbread plundering party on Sunday :)
Posted by verity at 11:01