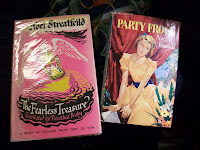 On Saturday afternoon, K took me to the Oxford Book Fair. It wasn't really planned - road signs had been appearing over the city directing cars to the event, and then I spotted a poster at work on Friday about it. I then emailed my friend Geraldine, who I met through this blog, and asked her if she'd ever been, and it turned out that she was planning to go, so I thought I should make the effort to go, since it was only 10 minutes drive from our flat! I text Geraldine to describe what I was wearing, and immediately on entering the building she correctly identified me and came up to say hello with her husband. They had already been there for a while, so were able to take me to the childrens book specialists, where we drooled over lovely first edition hardbacks of Chalet School books and many other lovely childrens books, often in their dustwrappers. I was very envious of Geraldine who kept saying that she had such and such a book, having been lucky enough to start collecting before prices went so mad. I did spot a couple of books which I could afford, and having sensibly (?) come out with only a couple of pounds, entered negotiations with Ken to have some money. Two lovely Noel Streatfeilds - Party Frock - which I'd read, and The fearless treasure - which I'd never come across before, but which is a historical novel.

I am not sure how interested I am in book fairs generally; they are aimed at the serious book collector, which, whilst I would describe myself as a serious book acquirer, I don't think I am. I don't have the money to buy beautiful editions of all of my favourite books, and obtain much pleasure from second hand bookshopping which somehow feels a bit different - you are more likely to spot a bargain. If I was to collect an author, it would be Noel Streatfeild, and seeing copies of her books has reignited my desire to collect her books. I don't think I can aspire to first editions (the hardbacks I picked up were later ones), but I would love to own her books in hardback eventually. I am definitely on the look out for her autobiographical "Vicarage" books again as I saw those at the fair (£55 each - eek!).

It was lovely to meet Geraldine and her husband after exchanging so many emails; we went for a cup of tea too.

PS: Lots of people asked commented on my planned trip to Black Swan in my last post - we didn't go in the end I'm afraid. After reading the synopsis and finding out that it was more about eating disorders and self harm than ballet, we thought it seemed like a depressing way to spend my afternoon off. And as it was so sunny we couldn't bear to be stuck inside, and went for a walk instead. I think I may wait for the DVD so that if it's unpleasant, I can just turn it off.
Posted by verity at 17:35