It's January, we got paid for December BEFORE Christmas, and although there are still another 2.75 weeks until the next payday, I have all but run out of money. Lots of book bloggers are doing the TBR dare, where they just read books from their TBR pile. I'm making a spin on this and I've decided that my baking for the next few weeks must be driven by the things that I have in the cupboard rather than baking recipes that I spot on a whim! Obviously I have plenty of flour, different spices butter, and will buy eggs, but the additional ingredients should all come from what I have in. Raisins and currents will also count as staple ingredients and I might buy the odd bar of chocolate. But apart from that, I must work with what I have, and use at least one ingredient from the stash each time. Sadly that means that the sachertorte is on hold, but I think I will make that delight for Valentines Day!

So, I thought I'd start by assessing what was in my cupboards, and this is what I found: 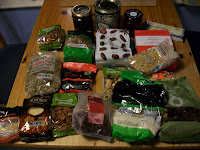 And that's not even including some things which I forgot to include - namely tins of coconut milk, a tin of treacle and a jar of pumpkin puree, Or the half empty packets - I have some figs somewhere, half a tub of custard powder, the box of rice crispies and many more sunflower seeds. Or the frozen fruit in the freezer!

I also took a picture of all of the bits and pieces that I have which I could use to decorate cakes with! 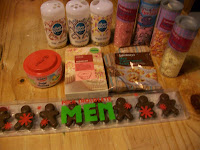 Here are some ideas:
- white chocolate and dessicated coconut in "Snowfall shortbread" from the Eat me book
- chocolate gingerbread men - on top of some ginger cupcakes
- treacle tart (have never tried this, but I spotted a recipe in the new Nigella book - may try adapting it to make it gluten free as enjoyed some wonderful gluten free treacle tarts from Asda recently)
- Christmas pudding cupcakes from the Eat me book - yes, it's a bit late, but the recipe looks so good - brandy butter flavoured icing = YUM!
- more mince pies?
- almond cake
- chocolate custard sandwich
- chocolate rice crispie cake

I also discovered some marmalade flavoured cookie dough in the freezer so I must make that too! I may not have much money but at least K will not suffer cake withdrawal!

I started with the Snowfall shortbread, as it has become a tradition that I make K some millionaire's shortbread after major sporting events and on Saturday he did a 200k bike ride as part of his training for L'Tour D'Etape next July. It's essentially millionaires shortbread but using white chocolate, and with dessicated coconut sprinkled on the top to make "snow". A fun variation! 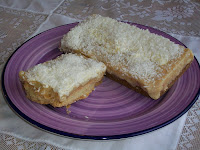 (Picture kindly taken by K as the light is so much better during the day!)
Posted by verity at 17:23