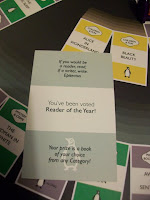 Who could resist a game where you are told that you have been voted Reader of the year?! Unsurprisingly, I drew this card - the rest of my family are great readers but certainly not as great a reader as me, and now it's official!

The Penguin bookchase game came out last year, and I had been quite keen to get my hands on a copy. My Gran kindly sent me a Christmas cheque in advance of Christmas so I decided that this would be something good to spend it on, since we were spending Christmas in the UK this year and at various family gatherings.

I can report that it is an excellent board game. You move around the board landing in each of six colour themed sections, answering questions which are predominantly (but not exclusively) related to bookish themes. It is a little like Trivial Pursuit, only rather better, in that each question has a choice of three answers, so even if you don't have any idea what the answer is, you still have a 1 in 3 chance of getting it right (and winning a book to put on your bookshelf playing piece). When you have books from all of the six colour categories, you must get back to the middle, but the presence of "Award or sentence" spaces where you must pick up a card that is a bit like a Monopoly chance card means that you can suddenly lose one (or three) of your books. This makes it fairer for the less bookish players (although, I think I have played it 8 times now and won all but one times). I have played it with an assortment of friends and family and it's easy to pick up and an enjoyable way to pass half an hour (if there are two of you), or more...

In other news, I am struggling somewhat with EXCRUCIATING pain in my ribs. I never shook off the cough that came with my flu, and coughed so much on Thursday that I have either cracked a rib or strained a muscle. I am unable to laugh without much pain, so have been sticking to sombre television and reading - I have managed to do quite a bit of reading as lying on the sofa seems to be best!
Posted by verity at 17:22