I mentioned earlier in the week that I had decided to reward myself with something bookish that wasn't a book to celebrate the fact that I had gone for a fortnight without buying any books (and making inroads into my TBR at the same time...).

Just before I went on holiday, the Seven stories museum ran a competition on twitter to win a rather special book bag - unfortunately I was unlucky, but when I contacted them, I found out that their shop sold them...

And as you can see, I couldn't resist. 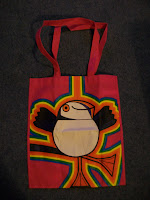 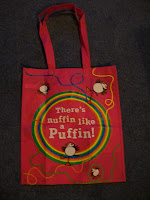 The bags have been produced as part of Puffin's 70th anniversary celebrations - I wrote a couple of months ago about two books which had been published as part of this.

There are also mugs, but at the moment I resist... (I don't think they are quite as good as the Penguin mugs - I wish they used some of the beautiful early puffin covers) I am tempted however to get the bag in the other, smaller size, in a different colour (they also come in Orange and Green; my colleague with the evil influence has the orange one and very nice it is too (and I blame her almost entirely for this purchase)).
Posted by verity at 08:09