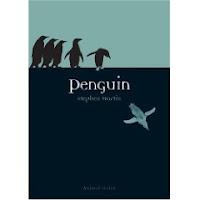 I'm not quite sure how I encountered the Animal series published by Reaktion books, but it is one that I have been meaning to write about for sometime.

According to Reaktion books the series is "the first of its kind to explore the historical significance and impact on humans of a wide range of animals...each book in the series takes a different animal and examines its role in history around the world. The importance of mythology, religion and science are described as is the history of food, the trade in animals and their products, pets, exhibition, film and photography and their roles in the artistic and literary imaginations"

I own the two titles relating to my two favourite animals, The duck, and as I'm sure regular readers can guess, The penguin, which only arrived a few weeks ago despite having been on order for 6 months.

What I love about these books is their wonderfully eclectic take on a single subject. The Penguin, by Steven Martin, describes the natural history of the Penguin, including information about the different species (the smallest is the wonderfully named Little Bee Penguin), and how they live. But what I found most fascinating is the cultural history of the penguin and Martin draws on an impressive range of examples - the film Happy Feet, Pingu (sadly, my favourite children's book, Lost and Found did not get a mention), and of course the Penguins in Mary Poppins. The book is lavishly illustrated with photographs of real penguins and images of penguins from the media - not just English examples but Russian too.

The Duck by Victoria De Rijke is similarly fascinating. I wasn't too sure about the section on duck as food (even before I became vegetarian I could never eat duck) but I loved reading about all of the references to ducks in popular culture, toilet duck for example, which I used to insist that my mum bought when I was little.

I'm not sure I would be interested in reading the other titles about animals which I am not so interested in, but I am sure there would be at least one title that would appeal to anyone, and they could make interesting Christmas presents.
Posted by verity at 17:00