Well, cake eating could easily be a sport.  It certainly seemed that way when I hosted the Oxford Free Cakes for Kids volunteers meeting last weekend.  I made four sorts of sweet treats in the end: carrot cake, gluten free marmalade slice, smartie cookies and mini Victoria sponges.  I had hoped for the beautiful pictures, but people turned up early and I didn't get a chance!  Much cake eating was done, but there was still a huge amount of cake leftover which Mr W and I have been ploughing our way through over the last week.  I've put on 2lb I kid you not which is not great so close to the start of the open water swimming season.  So no cake for me now, need to try to focus a bit more on starchy carbohydrates rather than sugars at least 6 days a week!

But onto what I really meant when I wrote the title of this post "Cake eating for sport".  I borrowed a book from the library recently called "Go faster food".  It's written by a marathon runner married to another marathon runner who wanted to come up with recipes to sustain them during busy working lives training for marathons.  It gave me a good recap of good nutritional advice but obviously the recipes were quite interesting too.  I wasn't especially inspired by the savoury options so much but more by the cake (surprise surprise), and since Mr W is embarking on a 400k cycle ride this weekend (yes, that'll be through the night - I think he will be starting at 6am and then completing it about 2am; fortunately the organisers are supplying a hall for people to sleep in so he can have a rest before he drives home (thus preserving my night's sleep!!) I thought I'd make something from it to help with the carb-loading beforehand and post race recovery.  I offered him the choice of two recipes that caught my eye (will probably make the other one next week as I happen to have both sets of ingredients to hand), he chose the honey, lime and ginger oaties.  They are described as a bit more cakey than a flapjack, but are very similar to flapjack in construction - melted butter mixed with sugar, honey, lime juice and zest, and ginger syrup mixed with raisins, oats, flour and stem ginger.  Fingers crossed that they do the trick! 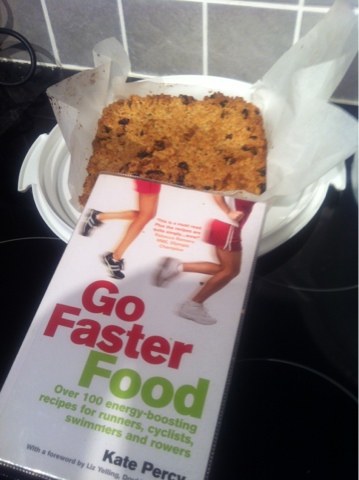