Weekend in the life...

After a busy week at work, it's time for cake making. I had two birthday cakes to make today and also made some biscuits - Mr W's family have a bubble of birthdays in early February and we're having a bit of a party tomorrow afternoon.

Michael was 16 on Tuesday, and as a total surprise for him, I've made him a cake to resemble the electric guitar he was given. (I had been planning to do one like his old guitar and had to hurridly change my plans when he had this exciting present). I know the neck is a little short, but it wouldn't fit on the tray, so we decided to cut it short! The rest is a replica of this guitar. 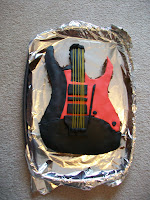 Emma is 11 on Monday and had asked her Mum for a cake with "drama masks" on; she is a budding actress. I found some moulds online, but neither sugarpaste, royal icing nor marzipan worked well enough with them, but thank goodness chocolate did. The cake is a sponge cake filled with white chocolate buttercream and raspberry jam and dark chocolate masks. 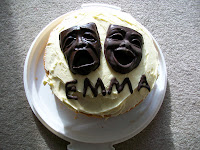 It would be impolite to reveal Mr W's mother's age, but it was her birthday on Thursday. I was told not to make her a cake, so have made her shortbread biscuits with her initial on 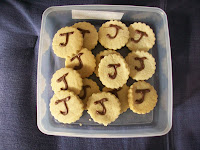 Happy birthday everyone!
Posted by verity at 15:55