An evening with the Hummingbird Cake Days book

Apologies for lack of posting this week - snow, much else to occupy my brain this week, and getting ready to go away in 8 days time seem to have disrupted things. Still, at least I haven't be disrupted on the baking front and on Wednesday I spent a delightful hour and a half in the kitchen baking. I admit that I was sniffy about the first Hummingbird Cookbook (mistakes, oddities, and the requirment to own an inordinate number of different sorts of tins), but I have to say that the second one is excellent. Perhaps this is because they got the more mainstream recipes out of the way in the first book, leaving the second one opened to more interesting things! I did put my own spin on the three recipes that I tried, partly to de-gluten them but also to just do things my way!
Mr W had some good job feedback on Wednesday, and to celebrate I decided to make him a special cake. As he's out on Tuesday (Valentine's Day), I decided to combine the two. I made the black and white chocolate cheesecake slices. As you see, I didn't quite make slices as I used my heart shaped tin, and rather than putting the topping on at random, I wrote a secret message in it :) Although I made this gluten free, I haven't got around to trying it yet, and Mr W is adament that I wouldn't like it! 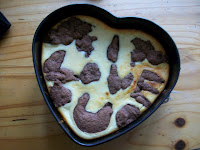 I then made the apple and oatmeal cookies - I modified these as I didn't have the patience to grate my apple, so I just put apple chunks in instead. Very tasty, although quite crumbly, but I suspect that that was due to my substitution of gluten free flour. Most have gone already and the remainder are earmarked for Mr W's packed lunches. 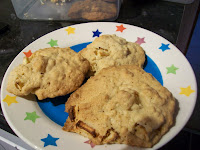 Finally, I had a craving for a really tasty and refreshing cake, so I decided on the orange almond and yoghurt loaf. I didn't have any yoghurt so made it without and it still tastes absolutely wonderful! Will definitely be making this one again! 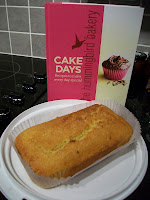