I haven't posted many pictures of my baking over the last few months - I have still been baking, so I thought I'd share two of the highlights today.

Firstly, a wonderful cherry and marzipan cake; it is a basic sponge, made half with ground almonds and half with flour (I used gluten free), and studded with glace cherries (I never used to be a fan, but I've since found that you can get less garishly red ones in Marks and Spencer). Half of the mixture goes into the tin, and then a disc of marzipan is put on top, before the other half of the mixture completes it - once baked, you have a lovely layer cake. 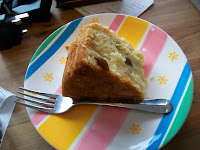 Secondly, a Rhubarb Crumble cake made with delicious rhubarb from the pick your own farm, that came in sticks longer than my arm! I used this recipe, although I left out the orange juice as I didn't have any to hand, and used ginger rather than cinnamon to make a spicy flavoured sponge. Sadly, although it tasted fantastic on the first day, using gluten free flour alongside the very moist fruit, meant that the texture deteriorated quite badly on the second day. 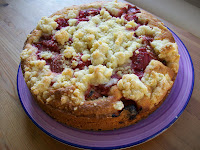