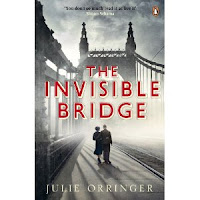 Owing to a big wildcard over the weekend, I didn't get a chance to read The invisible bridge from cover-to-cover as I planned, although I have started it. So, because I'm posting some thoughts tonight on my Orange longlist reading, I thought I'd at least put down a few thoughts now on this title. I have to say that I left it until last because it daunted me. It is quite a chunky book (nearly 600 pages) and has very small type, and from what I gathered from the synopsis, it involved quite heavy historical subject material (life as a Jew in late 1930s Europe). I wish I had not let these thoughts influence me and that I had had time to start it in time to finish it before the shortlist announcement as I have to say that I am absolutely gripped by the story so far. Yes, it is dense and there is a lot of detail, and the small type is irking me somewhat (but conversely, I really like the feel of the paper that my paperback edition is printed on!), but I don't know where it is going and I am interested very much in the characters.

In brief, then, the book tells the story of Andras, a Hungarian who has come to Paris in 1937 to study architecture, leaving behind his brother Tobias, who hopes to join him and study medicine. He brings with him a letter, which he has promised to deliver to a lady named Clara, a Parisian widow. He does this, and falls for Clara, and becomes drawn into her life. That is about as far as I have got for now but the synopsis say:

"From a remote Hungarian village to the grand opera houses of Budapest and Paris, from the despair of Carpathian winter to an unimaginable life in forced labour camps and beyond, The Invisible Bridge tells the story of a marriage tested by disaster and of a family, threatened with annihilation, bound by love and history."

I am looking forward to continuing with this one, and am grateful for Lija at Penguin who kindly sent me a copy to read.
Posted by verity at 08:01