Baking from the cupboards 11

I still seem to be going strong with baking from the cupboards, although this has also been slightly modified to "using up things from the fridge/fruit bowl so that they don't get wasted". My baking ingredients really are starting to run themselves down, which is good (for reasons that I will reveal next week or the week after...), although I still have plans for a few things left. if anyone has any good bakes that involve sunflower seeds, then I would love to hear from you, as I have a large packet, and apart from bread I can't think of anything.

Here are some banana and chocolate muffins, made using a recipe from Nigella's website. It was fun to use my mixer to beat the batter as I have mainly been making cakes by hand recently. I didn't have any cocoa, but I did have the remains of a tub of drinking chocolate so I cut down the sugar slightly, and upped the amount of drinking chocolate. The recipe made 16, only the rest disappeared to K's work... 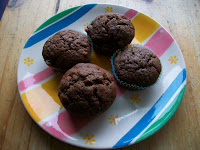 To utilise some dates and walnuts from the cupboard, I made date and walnut buns/loaf as this is a favourite recipe of my father's (it was something that my mother used to make frequently, and bring me pieces of when I was at university before I had a kitchen) and I thought that he would like some cake. K and I took the rest of them with us to Cornwall for puddings. 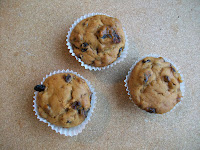 And finally, I mentioned last week that I'd provided a baking surgery for a couple of readers who had odd ingredients that needed using up. I suggested to Geraldine that she made some biscuits from the Nesquik website to use up her Nesquik banana powder, and she has kindly shared the results:

"When I looked at the recipe on the Nesquik site all there was, was a
list of ingredients. So here's what I did: put flour, sugar and Banana
Nesquik powder in the food processor and gave it a quick whizz, then
added the butter. Lastly I put in two whole eggs as the eggs I had were
medium. Recipe had specified 2 large egg yolks. In the spirit of
baking from the cupboards this was all done with items I had in the kitchen.

Then turned the mixture out onto a well floured, pastry board and rolled
the dough out, tried a few different shaped cutters, animal ones and
blossom didn't give great results, the square ones came out best when it
came to keeping some resemblance to the cookie cutter shape.

I set the oven temperature at180C, and baked them for 15 minutes.

Would advise anyone making this recipe to space the biscuits well apart
on baking sheets as they spread out more than I'd anticipated. I used
two baking sheets, should have gone with four baking sheets.

Mrs Hudson - dolls house cook, could have warned me about that, but she
let me make my own mistakes." 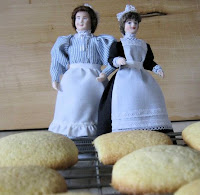