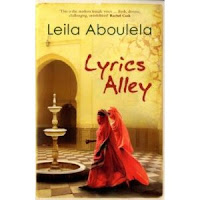 I wrote on Monday about my feelings about reading almost all of the longlist, and a little bit of me was sad that I hadn't managed to read all of it before the shortlist announcement. Of course, one of the two books that I hadn't managed to get hold of - The tiger's wife - had been shortlisted, but thanks to a very kind belated birthday present today I now have it in my possession. I felt quite proud of reading so many Oranges in a short time, so when I spotted Lyrics Alley at the library on Tuesday lunchtime, I picked it up with great excitement. It may not have made it to the longlist, but Leila Aboulela is an author who I have come across simply because her two earlier titles were longlisted in previous years. What I have loved about her earlier work is the way that she writes about cultures so unfamiliar to me, yet in a way that does not alienate me. Lyrics Alley is the same.

Set in 1950s Sudan, Lyrics Alley tells the story of the Abuzied family, an extended grouping who whilst obviously very close are often at odds with each other. It's a complicated family, and the cast of characters have names which are generally unrecognisable to my Western eye, which could make for difficult reading (I'm not sure why I struggle so much with non-Western names), but Aboulela draws them so colourfully that each individual really stood out for me rather than just merging into a blur. I particularly found myself warming to the women in the story, Fatma who has moved away with her husband and who feels slightly disconnected from family events; Soraya who becomes betrothed to Nur (her cousin), and particularly the two wives of one of the men Waheeba and Nabilah who represent very different attitudes. For this is what the book is partly about - the disparity between 1950s Sudan and the neighbouring Egypt where some of them spend their time, and Nabilah moves until she is brought back to Sudan where she suffers somewhat of a culture clash. She frowns on her fellow wife's desire to have her children circumcised for example...