Baking from the cupboards 12

Since baking from the cupboards also encompasses using up my decorative supplies, I whipped up these fairy cakes in only five minutes to welcome Ken home the other night - it's been a stressful week one way and another, and he's only been getting home after I've gone to sleep so I thought it would be nice to leave something by the kettle. 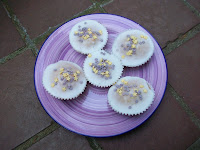 And as it also involves making use of items in the fridge, which although they did not feature in the original cupboard audit, must be used before they go off. Here are some lemon and sultana cookies using this recipe, which have filled Ken's lunch and tea boxes this week. 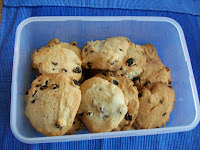 And in the true spirit of Baking from the cupboards, here are my Gingerbreadman cupcakes. Loosely based on this recipe from The Pink Whisk, but I realised when I started mixing/weighing that I had no greek yoghurt. So I adapted a regular fairy cake recipe to include some treacle, and plenty of ginger and cinnamon. And since I was putting chocolate gingerbread men on the top (bought in the post-Christmas sales), I wasn't sure that the lemon flavoured royal icing of the original would be appropriate, so I made up my own icing, adding ground ginger and golden syrup to icing sugar, and a little water. Yum! 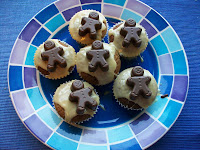 (And next week I'll be revealing quite why baking from the cupboards has become so critical, something which was at the back of my mind when I started it, but turned into a reality far more quickly than we had anticipated!)
Posted by verity at 18:16