K and I had an outing to Thame on Saturday. It was principally to have a nice afternoon out and to go to a cookshop to try to replace my pink silicon baking sheet (NB - while they are oven proof, they are not grill proof)...unfortunately they only had red ones, which I was not willing to buy. We picked up some goodies in Waitrose (gluten free chocolate croissants and almond tarts for me, a bottle of Porter and a jar of Chai Latte powder for him), popped into Oxfam where I picked up an original green VMC edition of Rosamund Lehman's short stories - too lovely to resist even though I'm trying so hard not to spend money, but the highlight of our afternoon out was the visit to the new library, which opened in July.

I didn't take my camera as I wasn't anticipating things being so exciting, but here is a picture from the library website. I always like visiting other libraries, partly because they have different book stock (of which more below), partly because the layout of smaller libraries tends to encourage me to browse more widely, but also because with my librarian's hat on I love to see how things are done, even though I no longer work in the public sector.

The library itself was very new and shiny, but lost points immediately for not having a staff desk visible when entering. We had some books to return (Oxfordshire lets you return books anywhere) and couldn't see where to do it. It then transpired that you could use the self-issue machines to do this; fair enough, but the library needs to make it clearer, because if someone trained in libraries can't figure out what to do, then it's unrealistic to expect other people to. There was lots of curvy shelving, which made it a little difficult to find the sequences of books - I struggled to find the start of the fiction, but there was a coffee machine upstairs and plenty of comfy seating. The most exciting bit was taking the books out - I'd identified the self issue machine by this point, and started scanning my books as I sometimes do at the main library, when the books suddenly started to appear on the screen without me scanning them! Being a librarian-type, I realised that they had RFID tags in the books (or radio frequency identification for the uninitiated...). This means that you just have to scan your card, and then put your books on a special spot on the counter, and the books are automatically added to your record. Clever! Despite having worked in libraries for over a decade (eek!), I had never actually seen this in action before (well, it is a relatively new technology) But again, I couldn't see any signs about this - I think it could have been confusing without my library background!

The most entertaining bit of the trip was K and I fighting over the remaining spaces on our cards. We use our cards interchangeably, or rather, I use his card as well as mine, which means we can take out up to 40 books between us, or rather, I can stack up books at home. I've been on a bit of a chick-lit binge recently: 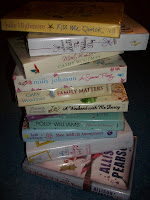 and with other books that I've taken out, we were only able to choose 8 books to take home with us. K looked so wistfully at me that although I could have taken armfuls home with me, that for once he ended up taking home as many books as me... Mine weren't terribly exciting, but here are his: 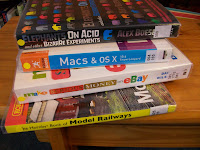 So there we go, a successful afternoon out and a chance for me to indulge my library geek.
Posted by verity at 17:18