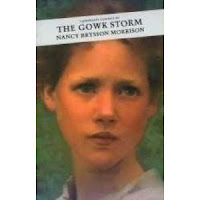 The gowk storm was another of the Canongate Classics that I was sent to have a look at (to recap - Canongate have made available quite a lot of their backlisted classics list through a new print on demand/ebook service). The title intrigued me; what was a gowk storm? It turns out to be an old name for an unseasonal snowfall in early Spring or a storm that brings trouble to people - as I read the book I saw that that title was apt.

This 1930s book tells the story of three sisters, Lisbet, who narrates the book, and her older sisters Julia and Emmy. The three live in a Scottish manse and tells the story of the girls and their relationships. Both of the older two fall in love with unsuitable men; Emmy falls in love with her best friend's fiance, Julia with a Roman Catholic. I was interested in the way that these women's lives were constrained by the restrictions placed on them by the society in which they lived; while we today have freedom almost to pursue relationships with who we like, this is a relatively recent ideal.

Both tragic and romantic, but beautifully told, I was gripped from start to finish, and agree that it deserves its place as among the canon of Scottish literary classics. As I've said before, very glad that Canongate are getting books which might pass the mainstream by out there.
Posted by verity at 17:17