Back to the Great British Book of Baking

I mentioned when I first wrote about the Great British Book of Baking that there were many more recipes that I wanted to try - here's a couple more. 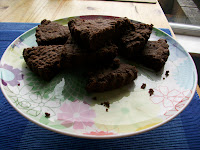 This is literally just a regular shortbread recipe, with a proportion of the flour replaced with cocoa - which I think makes a nice change. It smells amazing! 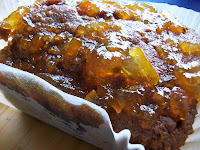 Stunning colours and absolutely stunning smell. What is interesting about this loaf is that the flavours and scent really intensified after 24 hours, which made me wonder about whether some of the contestants lost out a bit, having to present their cakes immediately after baking. Technically this wasn't really a marmalade loaf, it was really a spiced, nutty loaf with marmalade glaze. I think another time I'd improve it with at least some zested orange, if not some marmalade, or a layer of marmalade in the middle.

I've also been enjoying the blogs of a couple of the contests - particularly Ruth Clemens at The Pink Whisk - and ED, who won, at The boy who bakes.
Posted by verity at 17:40