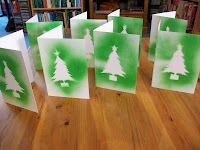 This year, partly for reasons of economy, and partly because I've really got into doing crafty things over the last six months, I decided to make my own Christmas cards. Earlier in the year, I decided to do some cross stitch cards for "special" cards, for close family members - if I had started in January, I might have had time to do cross stitch cards for everyone I know, but with over 60 cards to send, I think I would have got a little frustrated stitching the same Christmas tree over and over again. I have done a number of cross stitch cards of different designs, which will feature in posts over the coming Thursdays (I think there may be 4 Christmas card posts if that is not too tedious!), but today I want to show off the bulk of my cards, which I even got K to help making! It was very simple idea, and very cheap, although I did end up with a bright green thumb and index finger. I bought 50 blank cards on ebay, a bottle of green spray paint and found a Christmas tree stencil via google. I combined these three things, having covered the sitting room with newspaper, and here is the result!

Now I just need to start writing them!
Posted by verity at 11:10