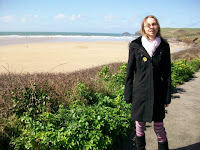 I'm back! I've had a wonderful time, in Cornwall. There was a lot of weather, but we managed to get out and about and I was thoroughly spoiled on my birthday with sparklers and banners and candles. I was lucky enough to have a parcel of books from my parents, selected from a wishlist that I had sent them - this was a wonderful surprise as I didn't know until I opened it what I would get. It turned out to be three more Greyladies titles - Covent on Styx, Eliza in the common and A proper place, the first two of which I have already devoured. I also had a copy of Jane Gardam's Crusoe's Daughter from a colleague. My fiance treated me to three books while we were away, including a lovely book of old Cornish postcards, and two memoirs of a lady who worked for the National Trust (of which I already had the first)(he had made the mistake of pointing me in the direction of the second hand booksale while he went to look at some farm machinery, so it was only fair to expect him to buy me what I found!)

(And there were many book shaped packages waiting for my return also; Claire from Paperback reader kindly sent me The orange shortlisted The still point for my birthday, there were 3 books from Canongate, and a few other things besides)

The highlights were Treveryan, Clothes-Pegs, The Vicarage Family, and Rambles beyond railways. I might write about some of these in due course.

By the way, if you're interested to know what I broke my bookban with, it was with a cheap set of the wonderful "English Journeys" books, which were brought to my attention by Thomas of My Porch, who is reading his way through them this April. When I saw the complete set for £15, less than £1 a volume, I just couldn't resist them as something rather lovely to dip in and out of. I'm particularly looking forward to Vita Sackville-West's Let us praise famous gardens, Vaughan William's Folk Songs, and Celia Fiennes Through England on a side saddle. I hope to see lots of mentions of places that I know, and to learn more about the history of England as a place. Now I just need to find somewhere to put them... Also whilst in Cornwall I bought a copy of Angela Du Maurier's It's only the sister (which I devoured lying in the sun on the beach).

Next week I'll be reviewing three more Orange long-listed titles in preparation for the announcement of the shortlist next week, so do pop by and see my thoughts and share yours if you've read any of them. I also hope to do an Orange themed bake! After this week I intend to continue my Orange Wednesdays series and review a formerly Orange longlisted title each Wednesday - until I get bored! I'm hoping that this will provide inspiration and direction to my reading as well as enabling me to read more modern women's fiction.

I'll start reading everyone's blogs again next week and popping by to say hello, and I'll also try to catch up on my emails!
Posted by verity at 11:28