I promised the other week to write about Fidra Books, an Edinburgh based imprint, run by a team of people who also run a specialist children's bookshop in the city. Their focus is on republishing children's books which have gone out of print and which they feel are unfairly neglected. So, as regular readers will know, since I like Girls Gone By books (out of print neglected school and girls stories), Virago Modern Classics (the rediscovery and reprinting of women writers), Greyladies books (old adult books by children's authors), and Persephone books it is not surprising that I am a fan of theirs!

Somehow I find children's literature, particularly that of an older Vintage, extremely comforting - it doesn't require too much effort, and it is nice to reread familiar books. Having said that, I enjoy exploring new children's literature too, and this imprint is wonderful in that respect.

Fidra's list covers a wide range of authors, many of whom I encountered as a child - Anne Digby and her Trebizon books, KM Peyton, Pamela Whitlock (who wrote The far distant Oxus - an absolutely wonderful read), Ruby Ferguson (author of the Jill pony books), and as I mentioned the other week, Josephine Pullein Thompson.

I have also introduced myself to some new children's authors through the list. Last summer I treated myself to a couple of Mabel Esther Allen's to read while I was on holiday, which I greatly enjoyed, and this year I took Joanna Cannan's We met our cousins away with me. I'd read her book Princes in the land, which was published by Persephone, so it was rather nice to be able to read one of her children's books. She was the mother of the Pullein-Thompson sisters and credited with creating the Pony-book genre! I am also keen to investigate Elinor Lyon as her books look rather appealing.

The website has fascinating biographies and bibliographies of the authors in the list and it is well worth a persual if you are interested in children's literature. It is fantastic to see so many of these books coming back into print and hopefully being made available to a new generation of children. My only quibble is that the books are somewhat pricey at £12, which means they are unlikely to be bought by children, more likely by collectors such as myself, but perhaps collectors will be inspired to give them to the children in their life. 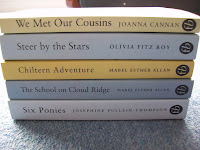