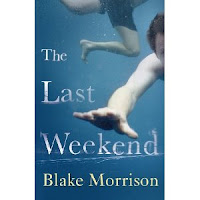 I first came across Blake Morrison at school when I happened on his memoir, And when did you last see your father, an absolutely wonderful book about Morrison's father's last days interspersed with recollections of their lives together, which has also been made into an extremely moving film starring Colin Firth. I then encountered him as a novelist (he has written two) when his excellent South of the river was shortlisted for the Booker prize, which I found to be an absolutely terrific read. Having enjoyed it so much, when I saw that Random House were publishing his latest novel, The last weekend, I asked if they could send me a copy for a sneak preview, and Fiona very kindly obliged.

The best introduction to the book is this early paragraph:
"As to the events of August, I don't suppose I'll ever get over them. I'm the kind of guy who feels guilty even when he's innocent - who expects to be stopped going through customs even when he has nothing to declare. But what happened that weekend would surely have happened anyway. It's not like I'm a rapist or a murderer. Even if I were, I would be honest with you. I'm trying to tell the story, that's all - not to unburden myself or extenuate some offence by to set things straight"

What a fantastic piece of writing to open with - Morrison has set up a mystery - what are the events in August, and why does the writer (the principal character Ian) feel the need to exonerate himself?

The book starts with Ian being invited, with his wife Em, by his old university friend Ollie, to spend a weekend with him and his wife Daisy by the sea. It is somewhat of a surprise to Ian to be invited but he agrees to go, hoping for some rest and relaxation amid a stressful time. However, as the reader knows from the paragraph that I quoted, it is unlikely to be that. And as Em and Ian settle in, events from the past re-emerge, and Ollie and Ian resurrect a rivalry from their student days which has never been resolved. It's difficult to say more about the plot without giving the story away, but Morrison carefully builds up the tale, piece by piece, juxtaposing the events of the weekend with events of the past, eventually leading to an absolutely horrifying (and to me, unexpected) conclusion.

It is an incredibly well structured tale, tightly written, and an absolute page turner that I could not put down until I had finished. Coupled with Morrison's excellent prose I thought it a wonderful read. So definitely one to look out for when it comes out next week on 6th May.

The book comes out next week on the 6th May, so do look out for it as it is a wonderful read.
Posted by verity at 08:00