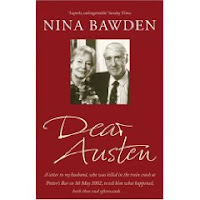 As regular visitors to my Virago Venture blog will know, I greatly enjoy Nina Bawden's fiction, particularly for their insight into family relationships and circumstances. Particular favourites thus far have included George beneath a paper moon and Anna Apparent.

You may have spotted her autobiography, In my own time, in my pile of library loot the other week. I didn't get around to writing about it, but it was a fascinating book and I could see how many of the events in her life had had an obvious influence on her writing -she was evacuated as a child which I am sure must have driven her to write Carrie's War, and her son Niki was schizophrenic, and this was reminiscent of the son in The birds on the trees.

But it would be impossible not to write about Dear Austen which I sought out after reading her autobiography. In May 2002, Nina Bawden and her husband Austen were on their way to an 80th birthday party in Cambridge, by train. They were involved in the Potter's bar train crash, and Austen was one of the eight casualties. In this book, Nina tries to come to terms with her bereavement by writing to her husband, telling him about the events, and becoming spokesperson for the survivors of the crash, and using the writing to try to make sense of the accident that left her injured and a widow.

It is incredibly poignant and it would be difficult not to be touched by this book. Bawen is such an accomplished writer that she really manages to convey her feelings, and many ring true for anyone who has been bereaved. Here are some passages:

"We had made such plans for that summer, do you remember? Among them was a cruise to the Arctic in August; a sentimental jounrey in memory of my father....we had already booked our tickets.."

"I miss you. All the time - not only when I cannot reach something off a high shelf, or need to fix the video-recorder, although of course there are many different occasions when I need your help for a specific reason that has nothing to do with our respective heights"

"The grey depression that had been lurking all week closed in on me. It is obviously worse when I am alone; especially at night, in bed...but it can descend suddenly, unexpectedly, an time, any place - like the men's clothing department on the ground floor of John Lewis...I have never, to my recollection, bought or been with you when you bought, any garment from that particular store, and yet whenever I go there I am assailed by such a choking sense of desolation...I wonder if I should by you something, a pair of socks, a tie....other places that you would expect to be more evocative do not have this effect. There seems to be no specialised location for grief".

"Obtaining compensation for injury rather than death is an obstacle race...it is not enough to have been rendered unconscious and raving with legs, arms and ribs broken; evidence of continuing damage has to be proved by expensive medical specialists...No one seems interested in what yourabsence means for me practically, which seems to me pertinent - what you could be doing for me, what we could do for each other..."
Posted by verity at 17:00