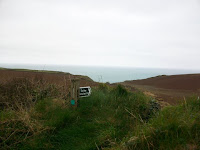 I have two absolutely wonderful books, written a century apart, both fantastic descriptions of the county of Cornwall. Whilst on holiday I read Wilkie Collins' Rambles Beyond Railways, and when I returned, Cath from Read_Warbler drew my attention to Frank Baker (yes, him of Miss Hargreave's fame!)'s Call of Cornwall which I read last week. And it is these two books which I am going to tell you about today, along with showing a few appropriate photos from my holiday!

Wilkie Collins' Rambles beyond railways is an account of what could be argued to be the first tourist trip into the county. Before the railway extended into the far South West, very few people made the trip into Cornwall, although Collins' title was somewhat obsolete as by the time the book was published in 1851, the railway had in fact made it into Cornwall, although only between Redruth and Truro - it was still a little while before Cornwall was connected to the rest of the country.

Today you can enter the county via Plymouth on the Torpoint Ferry as we did (the alternative being the A30): 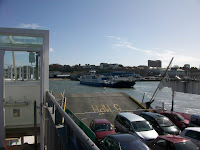 but Collins had to utilise the services of a boatman:

"We were lucky enough to commit ourselves, at once, to the guidance of the most amusing and original of boatmen. He was a fine, strong, swarthy fellow, with luxuriant black hair and whiskers, an irresistible broad grin, and a thoroughly good opinion of himself. He gave us his name, his autobiography, and his opinion of his own character, all in a breath. He was called William Dawle; he had begun life as a farm-labourer; then he had become a sailor in the Royal Navy, as a suitable change; now he was a licensed waterman, which was a more suitable change still; he was known all over the country; he would row against any man in England; he would take more care of us than he would of his own sons; and if we had five hundred guineas apiece in our knapsacks, he could keep no stricter watch over them than he was determined to keep now. Such was this phoenix of boatmen --- under such unexceptionable auspices did we start for the shores of Cornwall."

Of course I loved best his writing about the places that I knew, particularly Tintagel and Boscastle and the myths that he describes relating to these places. It was fascinating to read descriptions of places that I know over 150 years later in the mid Victorian period. It was a different world, but also recognisable. But I also loved his writing about the people of Cornwall, and their work in the mining industry and as fishermen.

I picked it up halfway during our trip when we planned a walk on Bodmin Moor, following a suggestion from the Financial Times Magazine the previous week. The walk mentioned Collins' trip to the Cheesewrings, a rather strange structure of balanced stones at one of the highest points of the moor. Collins wrote:

“If a man dreamt of a great pile of stones in a nightmare, he would dream of such a pile as the Cheese-Wring. All the heaviest and largest of the seven thick slabs of which it is composed are at the top; all the lightest and smallest at the bottom. It rises perpendicularly to a height of thirty-two feet, without lateral support of any kind. The fifth and sixth rocks are of immense size and thickness, and overhang fearfully, all round, the four lower rocks which support them. All are perfectly irregular; the projections of one do not fit into the interstices of another; they are heaped up loosely in their extraordinary top-heavy form, on slanting ground half-way down a steep hill. Look at them from whatever point you choose, there is still all that is heaviest, largest, strongest, at the summit, and all that is lightest, smallest, weakest, at the base. When you first see the Cheese-Wring, you instinctively shrink from walking under it. Beholding the tons on tons of stone balanced to a hair’s breadth on the mere fragments beneath, you think that with a pole in your hand, with one push against the top rocks, you could hurl down the hill in an instant a pile which has stood for centuries, unshaken by the fiercest hurricane that ever blew, rushing from the great void of an ocean over the naked surface of a moor.”
It was fantastic to have read this passage and then follow in Collins' footsteps, on what proved to be the most blustery walk I have ever been on. I'm surprised that I actually managed to get my head up l0ng enough to take this photo: 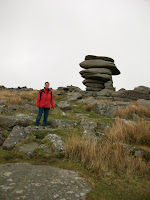 Fleur fisher has written a lovely review of the title here, which includes lots of quotations from the book, and also the chart outlining the walking tour and the distances covered between places, so do go and have a look for a far more comprehensive account of the book. AND, *more excitement*, you can actually read the title online for yourself here!

Move forward 125 years to Frank Baker's The Call of Cornwall. According to the blurb on the dustwrapper, a "book that had to be written", Baker produces an account of Cornwall, Cornish life, and Cornish places between 1930 (when he first visited the country) and 1976, when this book was written. Baker went on holiday to Cornwall in his late teens, and was so enchanted, seeing the potential for the life that he wanted to make for himself, that he gave up his job in London and moved down, hoping to start his career as a novelist. The first third of the book deals with his settlement in the South of the county, and his work as a church organist to pay his rent while he wrote! This section was more autobiographical than the rest. The later sections detail his marriage and further trips around the county, and the latter part deals almost exclusively with day trips he made in the 1970s to places further flung such as Bodmin and the North Coast. This was the part that I found most enjoyable because it described the places that I knew (I have to admit that in the first section I felt frustrated because it seemed to be yet another book concentrating on the south coast which I have not yet really explored!). Like Collins, Baker does not focus exclusively on producing a travelogue, but writes about the Cornish people, and I enjoyed contrasting his impressions with those of Collins.

Baker had a fantastic way of describing Cornwall. I was puzzled by a page which showed a stave with a musical chord on it between the introduction and the start of the book. All was revealed several pages later - this is what Baker believes to be the voice of Cornwall:

"What is this "voice" - how can I convey it in words?...but there is something deeper, certain vibrations words cannot easily communicate; a sense of the celestial at one with the terrestrial sealed by the "moving tides". Musi is more helpful, and one chord can contain it. I go to my piano. I strike the A an octave above the lowest note on the keyboard. Holding this with the soft pedal, I strike the E,C,E and B immediately above. Without releasing the pedal, I listen. I cannot say why, but this a minor chor held with its supertonic gives me the sound of Cornwall".

What a different way of describing things!

So, if you can't get to Cornwall, then I do recommend using these two books for some armchair tourism. If you can get hold of a pasty (probably more widely available than saffron loaf anyway) to eat at the same time, then all the better.
Posted by verity at 08:00