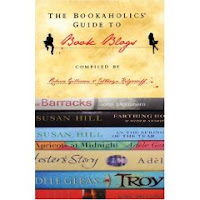 The bookaholics' guide to book blogs was a kind Christmas present from a colleague at another library who also reads my blog and thought that it might be an interesting read. I wasted no time in sitting down with it because the world of blogging is something that I have become acquainted with in the last year, by reading other people's blogs, and then by setting up my own. I was interested to hear what a pair of publishers had to say about the phenomenon.

Apparently bookish blogs were one of the first big areas of blogging, ahead of blogs centring on other subjects such as cooking. The authors can't explain this phenomenon but write that the aim of this book is to: "capture this moment. It's a book blog keepsake, when book blogs are exploding across the web and in it we talk abot the ones who are good, who should be sought out, communicated with and encouraged"

The chapter I found most interesting compares the role and value of book review pages in newspapers and magazines with blogging, and asks whether or not print journalists should be concerned about the rise of blogging. The principle criticism is the lack of quality control among book bloggers. But arguably book bloggers have many advantages that the journalists lack - they have the freedom to review the books of their choice, they can instigate debate, and they are not restricted in giving their opinion. Whilst I like to read the book pages in the newspaper to alert me to new books which I may or may not be interested in reading, it is usually from book blogs that I form an opinion of whether I am interested enough to order it at the library rather than wait to see if a copy comes available for my persual. Moreover, book blogs may alert me to older books or less mainstream books, and cover a far greater range of books.

The book is "illustrated" throughout with extensive quotes from blogs (I often found these more interesting than what the authors had to say about them). I hadn't heard of many of them, but Dovegreyreader gets a mention early on in the first chapter.

Other chapters talk about the different motivations for blogging, the blogs of bookshops and booksellers (I loved some of the stories quoted in these chapters about the various customers in bookshops and their weird and wonderful demands) and publishers' blogs. The blogs of writers are also given a chapter, and there is a chapter about online bookselling questioning whether there is going to be increasing overlap between review sites and online shops.

There is an interesting chapter on fanblogs; examples are mentioned which include The Bronte Blog, devoted to the Bronte's (the writers are a little scathing about the obsession of someone with such a narrow sphere of interest) and The Baker Street blog centering on Sherlock Holmes. This chapter also deals with blogs devoted to genre literature - horror, crime, romance.

I was left wondering whether really this book might have worked better as a blog...it could have included links (I read this sitting by the computer so that I could have a look at some of the sites mentioned), and I just felt that the content might have been better suited to that form. Blogging is such an interactive activitity that is quite different from the traditional medium of the book, and having the book as a book seemed at odds with some of what the authors were saying.

Has anyone else read this? I'm not sure it is a book that is necessarily interesting to a non-blogger, but I think that anyone who blogs might find it gives extra insight into a world which they encounter on a daily basis.
Posted by verity at 08:15