Latest acquisitions, or Christmas has come early for Cardigan Girl.

It's rather nice to be writing an acquisitions post for once, it's been a while. But since I lifted my book-ban, I have acquired rather a lot of books, although only two of the little pile below have in fact been purchases. I am still waiting for my copy of the latest Greyladies title to arrive! 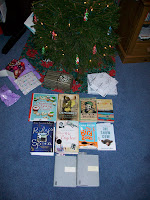 The two books that I bought are:
The world that was ours (Bernstein) which I bought when I went to hear Nicola Beauman tak about Persephone on Monday night. The ticket cost £4 which was redeemable in the shop, and I'd also bought my friend's ticket, so it would have been rude not to get a Persephone for £4.
The Usborne Book of Christmas Cooking was an impulse buy to give me the recipe for stollen, which I have already baked (and eaten!) and will be featuring on Bake of the week this month.

One book was a pre-order which I have been waiting for for ages:
To bed with grand music (Laski) is one of the latest Persephones and I pre-ordered (AND paid for it) it ages ago from The book depository. Supply problems meant I had to wait ages but it finally arrived, and I fortuitously recieved its bookmark with the Persephone BiAnnually. I'm saving this for Christmas now, and really can't wait!

Two books were extremely kind presents:
Book Snob Rachel sent me Dust tracks on the road which is Zora Neale Thurston's autobiography. I recently raved about Their eyes were watching God on my Virago blog, and am really looking forward to finding out more about the author.
My colleague Owen, who reads this blog, sent me the intriguing and very relevant The bookaholic's guide to book blogs which looks fascinating.
Thanks Owen and Rachel!

One book was a competition win:
Demobbed by Allan Alport came from a draw on DoveGreyReader's website - thank you very much! I don't usually get lucky in competitions, but I did this time. This looks like a fascinating read about what happened when soldiers returned from the war.

Four books were sent to me by publisher:
Snow Cow came via Librarything Early Reviewers and is a book of skiing Ghost stories - one for my holidays too then I think, as we are off skiing in a week's time...
The bird room was sent to me by Canongate - they occasionally send me books to look at, and I will be looking at this in due course...
Ruby's spoon came via Random House on Twitter - I was one of the first to reply to their tweet offering review copies of this book.
Dear Mr Bigelow was very kindly sent to me by Fiona at Vintage/Random House. I spotted this the other day on Amazon, and thought that it would make the perfect Christmas read. I love reading diaries and letters from the war, and somehow Christmas seems just the right time of year to read them. This is definitely on my post-holiday pile with To bed...

Christmas has definitely come early!
Posted by verity at 08:15