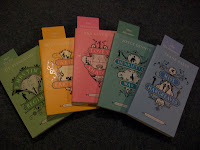 No, not the set surrounding Virginia Woolf, but the clutch of lost early twentieth century titles recently brought out by Bloomsbury. There's been a lot of hype around the titles, not least because the choice of titles was partly driven by recommendations of bloggers. It is always exciting when older books are republished because it gives a whole new generation of readers access to

Bloomsbury kindly sent me a set of the bookmarks which I had seen featured on various book blogs, and armed with these I started reading the books. There are plenty of reviews around on the blogosphere so I shall content myself with writing down a few impressions just now. I am particularly interested to hear which ones other bloggers have read and which ones they enjoyed most (aside from the ones which they have championed!)

I started by reading Miss Hargreaves, due to the extensive endorsement by Simon from Stuckinabook. It was certainly an unusual story (a character who is a figment of two other character's imagination comes to life), but I found it both unsettling and annoying.

The pink covered Love's shadow by Ada Leverson came next; I've got her Virago Modern Classic, The little Ottley's, and found after I'd bought Love's shadow that this is the first of three books contained in that volume. It tells the story of a married couple and their friends romantic entanglements in a comedy of manners.

Next up, Henrietta's War by Joyce Dennys. Again, I had read many reviews of this. Essentially a story of life in wartime, told through letters (originally written as a weekly piece for Sketch), this was slightly reminiscent of Diary of a provincial lady. There were some amusing incidents, but I felt that the way in which the book had been written meant that it was extremely episodic and not much plot development, which I would have liked more of.

I was particularly keen to read Mrs Tim of the Regiment because I had made the discovery of DE Stevenson earlier in the year through Persephone books' publication of Miss Buncle's book (and had then obtained copies of the sequels from the library). Whilst it didn't quite live up to Miss Buncle, I enjoyed the story of Mrs Tim, an army wife, and her life immensely. Written in diary format, this was also reminiscent of Diary of a provincial lady.

The only book that I do not own a copy of is The brontes went to Woolworths - I read this earlier in the year in a Virago edition, and intend to get a copy in that imprint if possible for my Virago collection.

Overall, I liked A kid for two farthings best; partly this was because it was the book that I had heard least about beforehand, so I found the story completely charming and new to me. It tells the story of 6 year old Jo, and the unicorn that he buys in the market, which he hopes will have the power to make wishes come true.

So - which are your favourites so far?
Posted by verity at 17:00