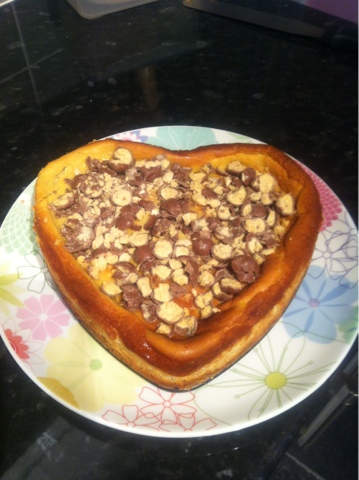 I've mentioned before that bananas can be somewhat a bane of the weekly veg box. Don't get me wrong, I love bananas and would be most upset if we didn't get some each week, but I don't always get around to eating my daily banana (particularly if they are not at the right level of ripeness) and then there is that dreadful moment when you realise you have more than one banana which is past the pleasant eating stage. So I'm always on the lookout for good banana recipes and here are two I've made in the last fortnight.Firstly a banana cheesecake from a recipe in last month's Good Housekeeping Magazine. It was actually a banoffee flavour but I didn't have any toffee sauce, merely a packet of maltesers which had accidentally been left in the sun, so I mashed them up and put them on the top instead. Cheesecake is a bit of a faff, separating eggs, and whipping the whites and folding it all together without losing the air, but it's a rewarding faff I think and Mr W appreciated.Secondly, this is my second attempt at banana and coconut flapjacks using this recipe. The first batch was exceedingly tasty, the banana makes them nice and moist (sometimes flapjacks can just be a bit too dry), and the coconut provides a different sort of texture. This second time around I added in some raisin.s 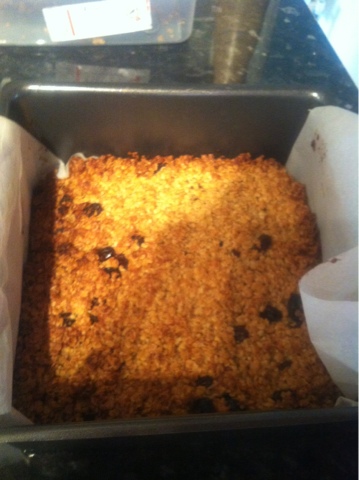