It's been an insanely busy week again, and I'm just not sure where the time goes!  I would love to blog every day as I sometimes used to, but I have barely had any reading time, let alone blogging time.  A large part of this week seems to have been taken up with getting wet in one form or another.  April showers have been the order of the day since the government announced the drought, and I only managed 1 out of 9 cycle rides to or from work last week in the dry.  I'm contemplating doing a service to the nation by getting some new waterproof trousers to match my new waterproof jacket; I know the rain would stop if I had some.

I have also been doing a lot of swimming.  On Monday morning I found out that I wouldn't be able to have my usual pre-work swim on Friday as the Swimathon was happening.  This is a charity event where you can sign up for a mile, 2.5k or 5k swim challenge.  Seeing that there were places available, I decided that I didn't have to miss my swim, and, as the session was scheduled to start at 6.15, 3/4 earlier than I usually hit the pool, I figured that as long as I swam fast, I could do 5k and still get to work.  Dreaded the 5.15 alarm, as the usual 6.05 one is early enough, but managed to get up, and it was just about light as I cycled to the pool, seeing 4 bunny rabbits on the way.  The challenge was good fun and I completed it in 1:30:39, although I am convinced that I completed 2 extra lengths which would have of course taken me over the 90 minutes!  Got given a medal which I showed off proudly at work to my colleagues' slight horror, but they are used to me by now... 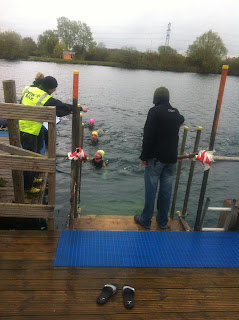 Today, I have been to an Openwater Swimming day in Reading.  It was mostly seminars, which were very interesting, for example, hearing about the Olympic Marathon 10k, learning more about good nutrition, a session from the coach at the training camp I went to in Feb on technique, and various other things.  One of the reasons I was keen to go was to participate in a 750m timed swim (not quite a race) as it would be my first UK openwater swimming this year.  I was less keen to get in given the weather, and particularly given that the water was only 12.5C!  However, with about 60 other brave souls I got in and managed to get round the course.  The first half was really hard as my body panicked and I became  extremely breathless due to the shock of the cold, but the second half was pretty good.  Not quite sure of my time as Mr W needed to be back for a concert, and I was desperate for a hot shower.  Here I am, the front swimmer in this picture, unable to say my name at the end of the swim.

I have managed to fit in a little bit of reading.  I have greatly enjoyed a book about a male librarian who takes up Ironman triathlon called Can't run, bike or swim.  And I've read a nice "mumlit" book called The playgroup by Janey Jones which was sweet and unpredictable.

Tomorrow will be a day of jobs and swim training and maybe some time to sit and chill out before another even more busy week ahead!
Posted by verity at 19:35