Many orange posts (which I hope people are finding interesting) - I'm now halfway through the list - and very little about cardigangirlverity life over the last week. So what's new? 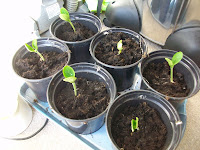 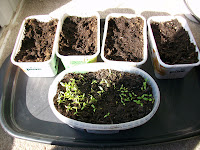 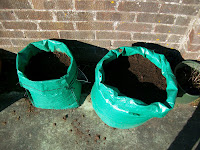 Spring is definitely on its way, it's light in the mornings now when I leave the house at 6.30 and it's light to cycle home which is SO lovely. Mr W has been working in the garden and we've been planting some vegetables. The garden is still in a state of mess and I'm not confident we'll get it all sorted so I'll be relying this year mainly on gro-bags and hopefully a small vegetable bed. We've planted asparagus and potatoes in gro-bags (won't get any of the former this year) and I've grown courgette and tomato plants from seed along with some parsley. I had great success with tomatoes from plants grown by a colleague last year so I would love to managed to do it from scratch myself this year. The courgettes are a week ahead of the tomatoes and have already sprouted and got potted on into something bigger - I can't put them outside yet as it's too early. We got some free seeds with the asparagus and potatoes so I may plant some carrots, squash and salad leaves too in due course... But I don't want to be too ambitious!

Yesterday, we went to Stevenage for a brass band competition - a different band to the one I wrote about in January, this time in the fourth (lowest) section. Mr W was playing too on the trombone and I was again on the timpani (only the seventh time I'd ever played them in fact). The test piece was a lovely brass band arrangement of Ralph Vaughan Williams' English Folk Song Suite and to our surprise we came third which meant that we have qualified to go to the National Finals in Cheltenham in September. If you've seen Brassed Off, yes, exactly like that. (Except that as we're in one of the lower sections we don't get to go to the Royal Albert Hall). Congratulations to Bletchington Band!
Posted by verity at 18:42