Not Mr W of course, but more specifically a bass drum, timpani and a suspended cymbal.

I mentioned the other day that one of the reasons that last week was so busy was because I'd been to two music practices. Predating this blog is my involvement in brass bands which dates back to 1998 when I took up the euphonium (an odd choice, but a welcome change to play something unusual rather than the ubiquitous flute which I played for four years before that). Following an early retirement when I went to university, I joined another band in 2006, and at the start of 2007 changed bands and took up the baritone (a smaller, slightly more portable version of the euphonium - see the below picture).

It was in this brass band that I met Mr W, he played trombone and sat behind me. Brass bands worth their salt enter competitions - the major one each year is "The areas", run in a football league table style with promotions and relegations based on the annual competition as well as a national finals for the top bands. But there are other competitions in the year as well, and one of the most fun is the Butlins Mineworkers Brass Band Contest held in Skegness every January. In 2007 I went along (for the first time) with my friend Liz, and Mr W had made arrangements to go with Liz's boyfriend and another friend and it was there that Mr W and I got to know each other properly. In 2008 and 2009 Mr W and I went back and shared a chalet but have not been since then. Since a number of friends who we haven't seen for a while will be going and since we didn't go away this Christmas, we booked a chalet and a day off (it takes so long to get to Skegness...) and are looking forward to a weekend of brass bands and beer (well, except that I don't drink beer because it contains gluten and Mr W doesn't drink Butlins beer cos it's mainly lager) and Being Braced. 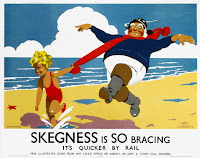 Yes, I have pictures of Mr W paddling in bare feet from 2008 but I don't somehow think I'll be having a swim in the north sea!

Despite the fact that "Butlins" is essentially a contest, I have never, until now, actually competed there, always just going along for the social aspect. This year, the local band were short of a second (and third) percussionist, and knowing that I was going along, and that I had played percussion in competitions before (ten years ago...), I have been asked to help them out. hence the rehearsals. I have to say that I don't seem to have the nerves of steel that I had when I was 17 and have had to be demoted from playing the triangle as my hand shakes too much at the start of the piece when I am nervous. But I have learnt to play the timps which isn't somehting that I've done before. There's just two more rehearsals for me to go now - I still need to learn to be a bit more aggressive with the bass drum, but hey, I'm a librarian.

So things may be a bit quiet for the next week or so as I practice my part at home using a saucepan lid, the two coffee tables and the bean bag, and whilst Mr W and I travel to Skeggy and back, but I'll let you know how I get on, if you're interested...