The last couple of years Mr W and I have been very lazy about going to the Oxford fireworks - they were a bit of a trek from us and no parking, and also very expensive, but, living in a flat in one of the rather posher parts of town we were treated to fantastic displays from all of the people in the neighbourhood who owned big houses with correspondingly large gardens.

This year, we decided to do things differently. Our new "village" (far too big to be a village in my opinion) has its own firework display, musical fireworks no less, so we decided to go up there on Friday night. It was the first excursion without my wisdom tooth and I was feeling quite wobby (and not able to say "ooooh" and "ahhhhhhhhhhh" as much as I would have liked) but they were probably the best fireworks I've ever seen and absolutely worth every penny of the £5 each we paid.

My Mum used to make something similar for the firework supper that we used to have when I was little. Sausages, jacket potatoes, soup and firework cake. Until I was quite big, we used to do our own fireworks in the garden at home. The garden wasn't terribly big - although twice the size of ours now - so they used to be quite small, fountains and roman candles etc. Now that we have our own garden, I thought we should reinstate the tradition, although we are not going to let off anything as large as a roman candle owing to the fact that we have not yet got around to sorting out the garden and there is an awful lot of overgrowth which could potentially set on fire. We will have sparklers of course so that we can write our names in the air. My Mum used to make a firework supper when I was little - sausages, jacket potatoes, soup...and firework cake. We won't bother with the sausages since I'm now veggie but I did decide to make a firework cake.... It just looks like a regular ring cake from the outside* 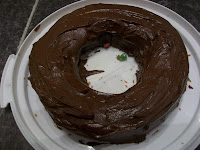 covered with chocolate frosting, but when you cut it open: 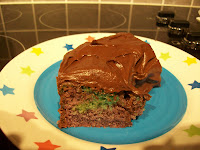 (Actually there are swirls of four different colours - purple, green, blue and pink - but only two seem to have made it into this slice!)

*It was actually intended to be a regular round cake but owing to sinking (really not quite sure why), I cut the centre out to save the day and preserve my integrity as a baker.
Posted by verity at 16:28