Things you can make in a weekend with a Kenwood mixer

Following on from the post I wrote about my new toy last week, I thought I'd write a post to share the wonderful things (bakes and others) which it assisted me in creating over the weekend.

We started both Saturday and Sunday morning with smoothies, made in the blender attachment. This is my fiance's role - I think it is probably the most masculine bit of the equipment and provides an outlet for relieving tension by pulverising fruit. We've frozen banana in chunks, and tend to use that as a base with some soya milk, orange juice and then whatever fruit we have to hand - this weekend it was strawberries and blueberries. 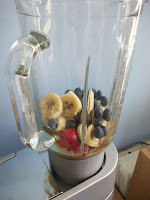 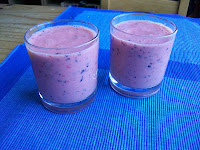 I used the whisk attachment to beat egg whites (oh so easy and painless) and made my first ever batch of meringues! We were really impressed with the result, and served them up with more fresh fruit. My fiance got the whisk attachment out again to whip cream for his bowlful. 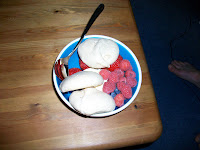 Making meringues means thinking of something do to with egg yolks, but I had a recipe in hand - Nigella's recipe for a Breton gateau, which she describes as a cross between shortbread and pound cake. It was essentially a shortbread dough recipe with the addition of egg yolks; this made for a very sticky dough, but when baked it came out biscuit like on the top, but without a crunch all the way through. I got to put it on my new cake stand! 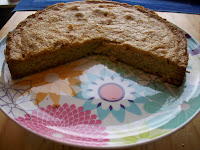 I haven't taken pictures of the last two creations, but I used the food processor attachment to make homemade pesto - far far easier than doing it with my hand blender as I did last summer. And then I made bread - we do have a bread machine but there was something very satisfying about making it in the mixer - for a start I was able to make it in a loaf shape, rather than a square block. Even if I didn't actually knead it, it still felt more hands on, and the smell pervaded our flat even more than bread machine bread does.
Posted by verity at 18:11