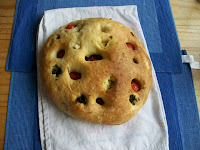 One of the things I think that I am going to use the Kenwood Mixer for most is making bread. We've not bought bread at all since last November when my fiance stopped working and needing bread suitable for sandwiches, with the exception of some Genius gluten free loaves for me, having instead been making use of my bread machine (we already used it, but only once a week as opposed to twice). However, we've tended to stick to a basic wholemeal recipe (no point adding herbs if you're using it for both breakfast and lunch - not sure rosemary and thyme would really complement marmalade or blackcurrant jam). Whilst I'd love to be the sort of person who makes fancy bread by hand, the reality is that either I don't have time or am too tired or just can't face clearing up the messy worktop. The Kenwood mixer solves this - although you need to be around for each stage of the recipe (unlike the bread machine which can just be filled and left, and left on a timer if you are going out), it does all of the messy mixing in one bowl, and then it is just a case of proving it, kneading it once more, putting it into a tin, proving again and then baking - total hands on time no more than 10 minutes. It's prompted me to experiment with different recipes and ring the changes on the bread that my fiance eats. I was extremely proud of this cherry tomato and basil focaccia that I made at the weekend; the recipe came from Leila Lindholm's Piece of Cake which I have from the library (and would quite like to own myself).

I also made some biscuits from Piece of Cake at the weekend; they are Swedish toffee fingers and absolutely wonderful. I broke my wheat restriction and had two (later regretting the pain I had caused myself) and they were delicious. They're shown here on my cakestand with some fig rolls that I made from Baking Magic and a couple of chocolate macaroons from the same book. 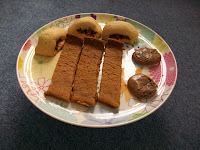