Inheritance: The story of Knole and the Sackville-Wests 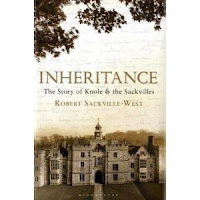 A couple of weeks ago, I went along to the Woodstock Bookshop for their latest talk, by Robert Sackville-West, on his book Inheritance, about the house Knole and the Sackville-West family to whom it has belonged since its purchase by Thomas Sackville-West in 1604. I was particularly interested to attend this talk having become a fan of the writing of Vita Sackville West through my Virago Venture earlier this year - her books All Passion Spent and No Signposts in the sea are particular favourites. I have long been keen to visit Sissinghurst gardens for its association with Vita, but did not know about Knole - I discovered that many of VSW's novels used Knole as their inspiration. I am now desperate to visit!

The house itself sounded absolutely fascinating - it is supposedly a "calendar" house - with 365 rooms, 52 staircases and 7 courtyards (however, this is only alleged, no-one has apparently counted the rooms to make certain). Robert Sackville-West and his family recently moved into a wing of the house, having been living in a cottage in the grounds for some time. The house is now owned by the National Trust but a number of family members have apartments within it (well there is certainly plenty of room!). RSW talked about the problems of refurbishing the apartment within the bounds of English heritage, but also touched on the good sides of living in such a remarkable place - primarily its fantastic history. A big house apparently lends itself to a lot of cupboards and thus to a culture of keeping everything providing RSW with a huge archive of material - letters, diaries, artefacts, to draw upon in writing this book. RSW was not sure that his 5 year old daughter agreed however, reporting that she had recently complained that "Susan visited my house at the weekend. It's not fair, I have to be invited if I want to go to her house!)

After the talk, I contacted Alice at Bloomsbury who very kindly sent me a copy of the book to read and write about. It filled out the details of the talk and provided a much more in depth look at the Sackville-West family and their lives. It is a wonderful story of an aristocratic family through the generations - I found Victoria, Vita's mother a fascinating character - RSW has gleaned lots of information from her incredibly candid diaries (for example, they reveal in code where and when she made love to her husband). The book, as revealed by the title, is based around the theme of "Inheritance" and the passing of the estate through generations - extraordinarily there were few straight father-son inheritances; Robert Sackville West is no exception, having inherited from his uncle. Vita Sackville-West was particularly devastated not to inherit the property.

My only disappointment was that there weren't more pictures - I would have loved to have seen more images of the interiors and plans of the house at various stages throughout its history. But perhaps the book is really more the biography of the people who lived in the house than a biography of the place itself, and in that RSW has undoubtedly written a masterpiece. If you have any interest in English country house and aristocratic life at any point between the 17th and 21st centuries, then do pick up a copy of this book. I have been dropping hints about a trip to Kent and very much hope to be able to visit Knole, with this book in hand, before too long.
Posted by verity at 17:12