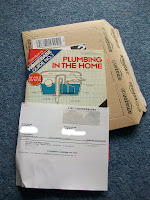 I bought a book online last week, having discovered that my favourite Josephine Pullein-Thompson pony trilogy (Pony Club Cup/Pony Club Challenge/Pony Club Trek) had a sort of prequel series. I was very excited about the arrival of Pony Club Camp, which was one of the few of this earlier series that I could lay my hands on via Amazon marketplace. I was very mystified when a very thin Amazon envelope popped through the door (it was an Amazon marketplace order "fulfilled by Amazon"). It turned out that my order had not been fulfilled by Amazon, quite the opposite, as they sent me a very basic guide to plumbing (which my fiance said was not worth the paper it was written on).

Have been in contact with Amazon and hope that I will get a response! In the meantime, I thought I would share the picture with you, as it is really quite beyond my imagination to see any similarity between a plumbing book and a pony book. Maybe there is someone out there who was hoping to solve their plumbing problems this weekend, who instead got a story about ponies. Who knows?!
Posted by verity at 17:00