Well, this post has been a while coming, for which apologies, and most of you are probably fed up with hearing me talk about it.  Life has been an absolute whirlwind in the last fortnight with carrying the Olympic Torch, using it for fundraising, auctioning it on ebay, selling it and then the subsequent media publicity.  Things are just starting to die down now, and I'll spend some time this weekend totting up all of the money that I have raised and then that will be it.

My torch relay day was 9th July. I had the day off work, and Mr W took the afternoon off as I was due to carry the torch in the late afternoon.  I spent most of the morning feeling hugely nervous and excited and trying to persuade as many people as possible to come along, and feeling cheered by a lovely Good Luck card from the Mind Events team.  Before I knew it, it was 2pm and time to put on my uniform.  Some of the supporters had started arriving at our house to don Mind t-shirts and pick up flags, but I then had to leave before the full contingent had arrived to go to my pick up point, the local leisure centre.  This was for me a short walk away (the rest of the other torch bearers had had to drive), so I had to contend with a lot of interested looks as I walked over.  At the pick up point we had a briefing, a lot of waiting around, some posing in front of the bus, and eventually got onto the bus to go to the start of the Kidlington leg to wait for the flame to arrive. 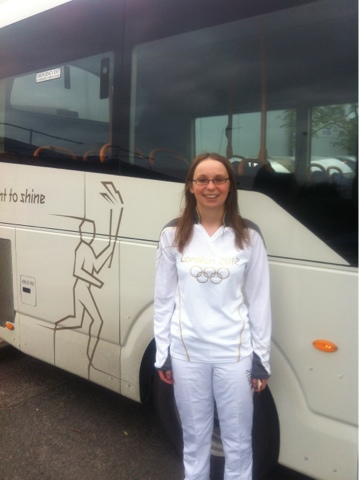 When the bus turned out of the leisure centre, it was an amazing feeling.  The roads had been pretty empty when I walked over, but in an hour, people had come out in vast numbers and they all went mental when they saw us on the bus!  We had to drive along the whole of the route, so lots of waving, and particularly excited waving when I saw my family and friends waiting where I would start my leg.  After another half hour wait at the start, the flame was approaching, so we started the dropping off process.  Our bus deposited each torch-bearer about 5 minutes before the flame arrive at their starting point, where they would wait for the previous torchbearer to come and light them up in "the kiss".  I was dropped off on the other side of the road from my family, but when I pointed them out to one of the stewards, they took me across and I was able to say hi to everyone. 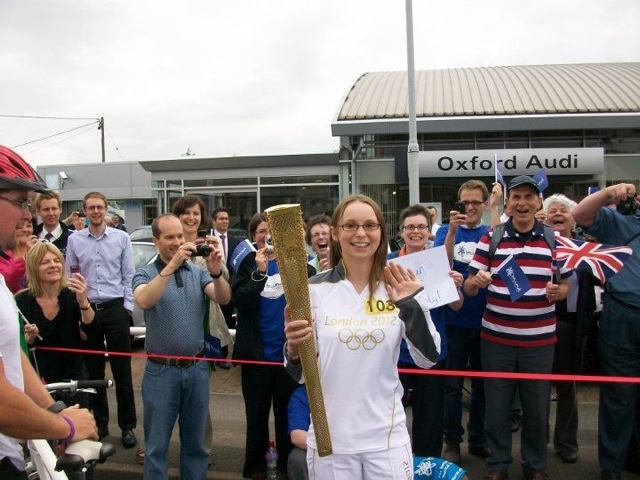 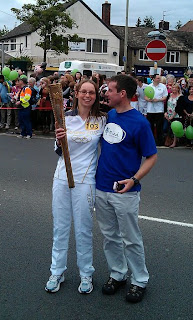 Lots of photos, and then completely random strangers wanted photos, and all seemed to know my name.  Suddenly the flame arrived, and I was positioned to be lit up.  I waved at the web cam because I knew how many people were at home/work watching me.  The torch was lit; wow; it was quite fiery and I worried about my eyebrows (and suddenly as to whether my shoe laces were tied properly, bit late to think about that!  Everyone was cheering and I was off, running and waving.  It was a bit of a shame then that my supporters didn't really see me run but Mr W ran trying to get some photos.  And, as I went along my 300m I saw my colleague's wife, and then two more friends just at the end.  Just as I was starting to run out of breath and waving strength and smiling ability, I could see the next torchbearer ahead and we passed the flame.  Then it was back onto the bus for the remainder of the relay, more waving at the crowds, before we went back to the leisure centre to get our torches decommissioned and then make our way home.

Obviously, I had walked there, so I had to walk back and I was mobbed several times for people wanting their photos with me and the torch. When I eventually made it home, the fizzy wine was flowing although they had resisted starting eating the cake.  We took loads of pictures of everyone with the torch and generous donations to Mind were made.  My facebook and twitter accounts went absolutely viral with people uploading photos of me.  It was very difficult to wind down and go to bed after that! 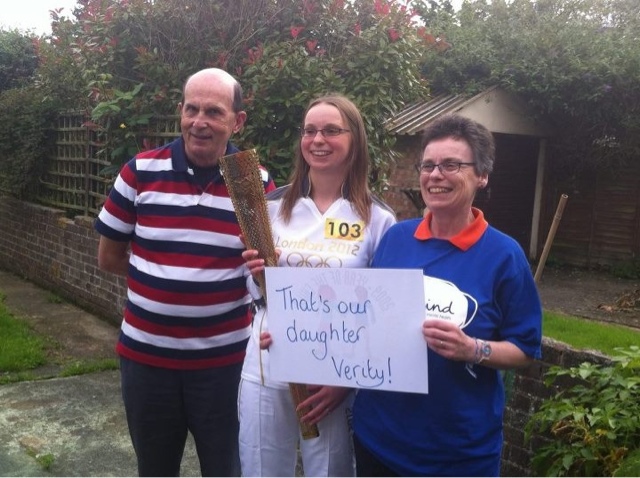 The next day I put my torch on ebay and in the meantime Mr W and I did some fundraising events taking the torch to our workplaces and Tri club asking people to make a donation in return for a photo with the torch.   The torch auction finished this last Tuesday and closed at £4.3k which is an impressive total.  The local media got very excited and I did a radio interview before work on Wednesday, which was used as the basis for this article, and local tv and local paper interviews at lunchtime!

There's been some excellent publicity for Mind, through the media opportunities, as well as the Mind-t-shirt clad supporters on the day, and I have had some really good conversations with people about mental health as a result.  Mental health is not talked about as often as it should be, and yet with 1 in 4 people in the UK suffering a mental health problem each year, if it's not you suffering, then it's very likely to be someone close to you.  Mind are doing excellent work supporting those with mental health difficulties, promoting good mental health, and raising the profile of mental health issues in the UK, so I am very happy to have been able to support them over the last fortnight.
Posted by verity at 17:30