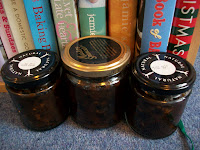 Or perhaps rather than the tenth of my domestic arts posts, this should be the first of my getting ready for Christmas posts...

Finding myself with some spare time at the weekend, and a desire to do something towards getting ready for Christmas, and with a number of spare apples from a colleague's mum's tree, I decided to make some mincemeat! I'd never made mincemeat before - like jam it seemed like a bit too much domestic goddessness when you can get very good stuff in the shop. I hunted around for a recipe - I didn't want to use suet, because even though you can get vegetarian suet these days, I wanted to avoid using something processed. My online research revealed that the recipe I had found in Nigella's How to be a domestic goddess was probably the best one to try, but it also gave me confidence that even while following a basic recipe, you can play around with the different dried fruits used. I can't stand glace cherries, so I put in cranberries instead, and I only used a tiny amount of nuts.

Here is the original recipe in case you want to give it a go:

Source: How To Be A Domestic Goddess by Nigella Lawson

In a large saucepan, dissolve the sugar in the cider over a gentle heat. Add the roughly chopped apples to the saucepan. Add all the ingredients, apart from brandy/rum and simmer for around 30 minutes until everything has a pulpy consistency. Take off the heat and when it has cooled slightly stir in brandy/rum.

And here is the finished result!


I've restrained myself from making mince pies thus far, or my very special mincemeat shortcake, as I know that if I do, all of the mincemeat will disappear before we even get to Advent. I have to confess to having a couple of spoonfuls straight from the jar though.
Posted by verity at 10:23