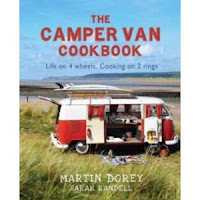 It's National Baking week this week, so although I hadn't been planning to write about The Camper Van Cookbook until next week, as most of my recent baking has been from this book, I thought it was time to discuss it. I should confess that I am not a camper van type; I like my creature comforts and my hair straighteners too much to want to holiday in one, but I did stay for two nights in my future-brother-in-law's camper van when in Edinburgh at the end of August. It wasn't nearly as bad as I anticipated, particularly since the fact that I needed to train for my swim necessitated daily trips to the swimming pool where I could get a proper shower. We didn't actually do any cooking in the van, instead relying on meals out, but the principle of cooking on 2 rings is quite appealing to someone whose cooking is minimalist (apart from baking) and so when I spotted it in the library, I thought I'd borrow it.

How does baking fit into this cookbook? Well, the baking recipes are at the beginning and designed to be made to take along on your trip. But, you don't need the excuse of a camper-van trip to bake! (Imagine how many trips I'd have to make). I've got three recipes to share with you today, two made, and one still in process:

1. Prune and sultana earl grey tea loaf - I made this to remember my friend Emily who was a big fan of earl grey tea. K's been eating it spread with unsalted butter. 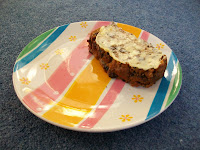 2. Peanut cookies. I've developed a real thing for peanut butter recently, and am a convert to making things with peanuts - I genuinely thought I hated it! Anyway, I couldn't resist making these cookies which are peanut and cherry, and made chocolatey with cocoa powder. They are apparently extremely light. 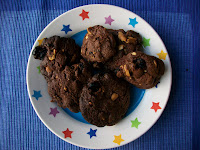 3. Nut slices. These are still in process; essentially they are like millionaire's shortbread, but rather than having a traditional shortbread biscuit base, the base is made with crushed hazelnuts. I've done the caramel layer and the chocolate layer on top, but it's currently setting in the fridge.

By the way, the photos are much higher quality than usual since I got K to take them as I didn't have time! I also want to make the ginger cake from this book, and, I am contemplating making the halloumi and grilled vegetables from the actual camper van cooking bit before the book goes back to the library.

As a postscript - many of you were interested in my pastry experiment. I can report that the shortcrust pastry, although it ended up thicker than shop bought pastry (especially ready roll!), was thought far superior to that which comes from the shop. I used it to line a quiche filled with smoked salmon and broccoli, both of which were leftovers, and then the usual egg and milk mixture. And no, I didn't ever make pastry at school - we did do some cookery, but I seemed to make endless pasta sauces, as well as the infamous pizza that my Dad broke his tooth on...
Posted by verity at 18:31