From comfort reading to comfort television and comfort eating...

I meant today to write about the new Shopaholic book (Mini shopaholic) which one of my colleagues had kindly left on my desk for my return to work; we both hoped it would cheer me up, but when I got home I was too tired to do anything beyond lie on the sofa.

I *do* however like Nigella's cookbooks, well, specifically I like her book, How to be a domestic goddess (I have problems with most regular cookbooks since they are often at least half-filled with recipes containing meat which I don't eat, but this is rarely so much of a problem with a baking book). I also have her Christmas book, although I've only had it for one Christmas, so it is as yet to become as firm a favourite. I've been quite tempted by her latest book, as it has been half price in Waterstones for about a fortnight, but my current economic climate has forced me to resist.

However, I recently spotted a recipe from the book on a blog for a coconut and cherry banana bread, so with plenty of bananas that were going off (we'd bought them for refuelling after our swim), I thought it was time to make it. (In fact, it was the sight of browning bananas and my insistence on turning them into cake that proved to me that I had turned the corner in my recovery from my nasty cold). 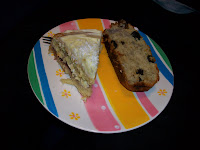 It was pronounced very nice, and I'm minded to make it again, although it is a bit more extravagant than a regular banana bread. I'm also wondering about using that combination of flavours in a Verity friendly recipe (since I don't eat dairy or gluten), by making a coconut, cherry and banana flapjack.

It's shown here with a coconut cake that I made for my fiance last weekend, a recipe from a BBC Good Food 101 bakes and cakes book that I'd made before. I'd run out of butter so I had to use Pure (vegan spread) for the icing, but it gave it a wonderful texture and he said that he couldn't really tell the difference.
Posted by verity at 08:19