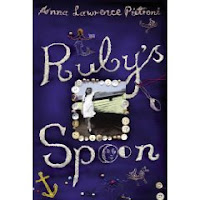 Another review from me today - I started a new job on Monday, and so am using this week as a catch-up from Christmas reading while I get to grips with managing my time again! I received a copy of this incredibly quirky book from Vintage, and had to start reading it straight away because the plot sounded so intriguing. A young girl, named Ruby, becomes caught up in the story of a witch, a mermaid, and a missing woman.
Ruby, the main character, helps out in a chip shop, and encounters Isa Fly one night - on a hunt for the missing woman. Ruby becomes involved in the hunt, hoping that she will get the adventure at sea that she longs for, but ends up antagonising the local residents. I found the story a little difficult to follow at times because it was so unusual and unlike anything that I had read before, but I what I liked most about the book was that it was unusual.
Set in the Black Country, one of the highlights of the book for me was the use of local dialect which almost had to be read out loud to make sense:
"I cor stay long. I cor leave the vats unwatched. Catch the fat could, and then we'd all be fried"
Similarly the wonderful descriptions of the surroundings enabled me to imagine a region that I have never visited and added to the sense of mysticalness around the book.
I would not be surprised if this book is a big hit when it comes out next year and would not be surprised to see it on a prize list or two.
Posted by verity at 17:15