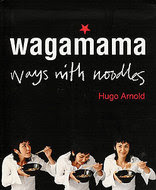 As regular readers of this blog know, I've been following a pretty restricted diet throughout most of 2010 in the hope of easing my stomach problems - it's worked and it hasn't worked, and it has made me a little bored with the difficulties of eating out and with eating the same things over and over again. However, in the summer, we discovered a new food that I liked, and a new place that we could go out to eat - Noodle bar food! And in particular, Noodle Soup. As long as I choose rice noodles, then it is an absolutely fabulous option - no dairy products in sight and hugely hugely tasty. It's not exactly baking, but I am quite pleased about it, so thought I'd tak about it on the blog.

It wasn't long before I wanted to recreate the noodle bar food at home. I initially made up a recipe, but then a friend recommended the Wagamama Cookbook. I've not actually been to Wagamama - it's more pricey than the Noodle Bar in Oxford, and the menu options actually seem less appealing, but I knew that they were famed for good noodle recipes. I looked in the library, and whilst the Wagamama Cookbook was out on loan, I spotted another book - Wagamama: Ways with noodles. What fantastic inspiration, some lovely ideas of different ways to cook noodles.

* Cook enough noodles for however many people you're feeding, and drain (can be thin rice ones, fat rice ones, any sort really - I used thin white ones).
* Grate some fresh ginger into a saucepan, add a good shake of chilli flakes (or some chopped fresh chilli), add a good shake of soy sauce.
* Add some boiling water and bring this to the boil.
* Throw in some stir fry veg (either cut up your own or use a ready mix)
* Put in a piece of salmon, per person (or you could use prawns) and simmer with the veg until cooked through.
* Remove the salmon onto a plate
* Put the cooked noodles in with the vegetables to reheat.
* Plate up the noodles and vegetables and soup (need a nice big bowl really) and serve the fish on top. 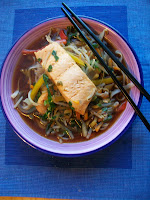 I won't be posting tomorrow as I have to attend a funeral, but I have an exciting domestic arts post lined up for Thursday - it's been a while since I did one of those and I'm quite impressed with my latest domestic art.


* This has led to subsequent difficult conversations regarding what to have for dinner these days. I'll ask K what he wants, and he'll say something like - "yes, let's have roast beef, but without the roast beef".
Posted by verity at 17:17