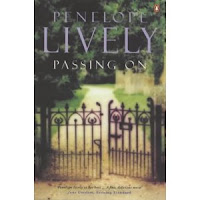 A Penelope Lively was my next choice for a book about a librarian from the bibliography of librarians that I read earlier in the year. (Actually, I've read 3 more since I last posted about one, but need to do a catch-up post on them!). It was a somewhat depressing book, and rather ill-timed with me reading it, as it dealt with an unmarried brother and sister, Edward and Helen, coming to terms with the death of their rather manipulative mother. It didn't actually talk much about Helen's part-time job at the library, but there was this lovely passage about Helen's love of books and choice of career.

"Helen read a great deal. The feel of a book in her hands was an ancient solace - not, originally, because of what lay between the covers, but as a screen, a defence, a shield. The book she was reading had once been the physical barrier between her and her mother "head in a book as usual," Dorothy would say with contempt. "You should be doing something, not just sitting there. Helen had drawn Edward into this sheltered place, and read aloud to him. And presently, what was within the books became significant also - quite small books would do, she discovered, because of what they said, one did not always have to get behind Bartholemew's atlas or the bound volumes of Punch that lurked in the bottom of the sitting room bookcase. She read her way through what was in the house - not a daunting process, given her mother's resistance to the printed work - and then resorted to libraries. Her choice of occipation, she realised had perhaps been fore-ordained, written into the scheme of things like some genetic prescripption, laid down by her mother's inclination. Dorothy did not care for books, so Helen became a librarian"
Posted by verity at 17:57